Khaleda Zia prays at Koko’s grave on his death anniv 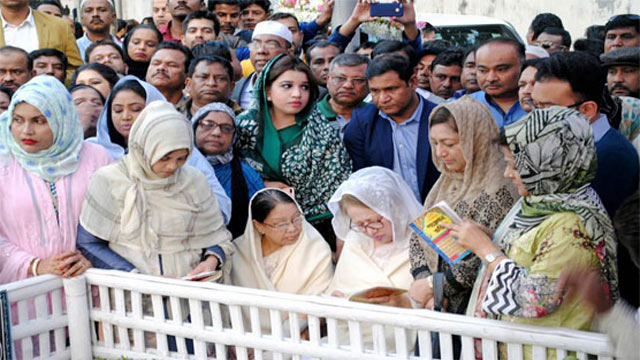 The BNP chief along with her relatives went to Koko's grave around 4:50pm and offered fateha and a munajat there.

Earlier in the day, Fakhrul along with some party senior leaders placed a wreath on Koko's grave, paying homage to him.

Later, Fakhrul distributed warm clothes among some poor people in front of the graveyard at a programme arranged by Arafat Rahman Koko Jubo Krira Sangsad and Arafat Rahman Smriti Parishad.

On the occasion, BNP held a discussion and doa mahfil at its Nayapaltan central office around 10:30am.

Another milad was held at BNP chairperson's Gulshan office in the evening.

A Qurankhawani was also held at the BNP chief's Gulshan residence on the occasion.

On January 24, Arafat Rahman Koko died of cardiac arrest at the age of 45 at his rented house in Malaysia. His body was brought back home on January 27 and buried at Banani Graveyard.