Swearing-in Ceremony of Secretary of State 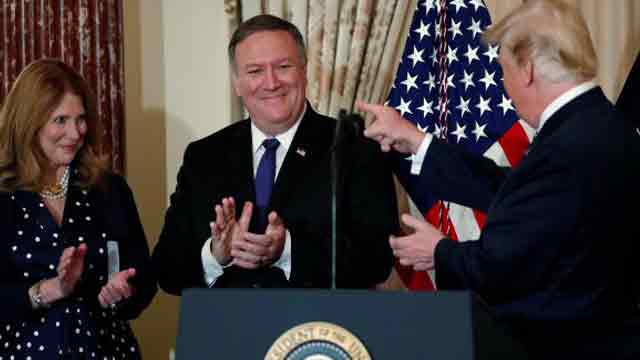 Special correspondent from Washington, May 2 (Just News): Mike is a true American patriot, said the US President Donald Trump on Wednesday as Mike Pompeo formally took the lead of the State Department.

President Trump, who made his first visit to the State Department to participate in Pompeo’s swearing-in by Vice President Mike Pence at Benjamin Franklin dining room, praised the “exceptional leadership” of the country’s 70th secretary of state.

The US president said “For the last 15 months, Mike served as our nation -- and served our nation as the Director of the Central Intelligence Agency, where, I can tell you, they have such respect for him. It's unbelievable. They may be the only people that are not very happy right now. But they'll be happy.”

“Mike has also earned my deepest respect and admiration and trust. And you'll see why over the coming years. Probably, over the coming months. I have absolute confidence that he will do an incredible job as the nation’s 70th Secretary of State,” the president added.

Trump said “As Mike travels the world, he will carry out the greatest mission and highest duty of the State Department, to represent the interests of the American people.

“This mission includes overseeing more than 13,000 Foreign Service Officers, who act as our representatives to the world; 12,000 Consular Officers; and an administrator of just an incredible immigration system -- system that we're going to be changing and fixing and making better; a system that's under siege right now. But a system that will in fact, hopefully, be the talk of the world by the time we finish. “ President added

He said, “We have 3,500 security personnel, and thousands more diplomats, embassy staff, civil servants, and administrative personnel, all of whom collectively play a vital role in advancing the safety, liberty, prosperity, and all good things of the United States. Very important people. Great people.

As President Eisenhower said in 1953, “Make no mistake, the reason we have representatives around the world is to protect American interests.” For nearly 230 years, the men and women of the United States State Department have skillfully and proudly answered this call.”

Mike Pompeo in his speech said “Mr. President, I always want – also want to say thank you to you. You have entrusted me with a weighty and awesome responsibility to serve the American people – first as the director of the CIA, and now as the Secretary of State.”

This responsibility becomes more sobering when we consider the many threats to American security and prosperity and our liberty, he added.

Secretary of State said “We will employ tough diplomacy, when necessary, to put the interests of the American people first. I will work to ensure their safety, to preserve their rights, and to defend their values. And I will make sure America is always a respected and principled leader on the world stage”

“We have much to do, but in every position I’ve had, I’ve witnessed the skills, expertise, and patriotism of our foreign affairs professionals. Whether civil servants or Foreign Service officers, political appointees, or locally employed staff, you all lay it on the line to make sure that America is safe and prosperous and free. Thank you for that.” Pompeo added.

We are committed to the permanent, verifiable, irreversible dismantling of North Korea’s weapons of mass destruction program, and to do so without delay, he added.
The former CIA director, who was confirmed last week by the Senate, said he “will make sure America is always a respected and principled leader on the world stage.”

Supreme Court Justice Samuel Alito swore in Pompeo last week in a private setting before he left for his first foreign trip as secretary of State. Trump will preside over a formal ceremony.