The world mourns a flawed yet beloved genius 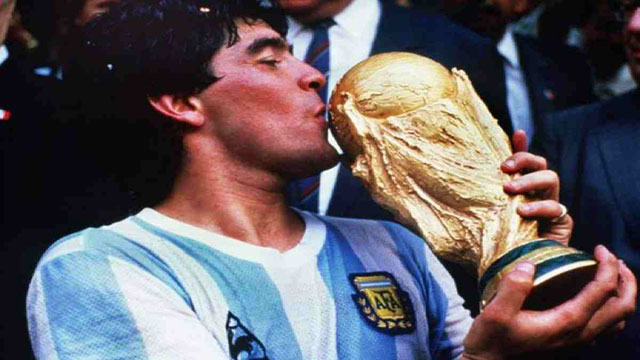 Tributes have been pouring in from the world of sport and beyond on news of the death of Argentine football legend Diego Maradona, who passed away after suffering a heart attack at his home on the outskirts of Buenos Aires on Wednesday. He was 60.

Maradona scaled heights of individual brilliance not seen before or since on football’s grandest stage, the 1986 World Cup held in Mexico, to lead his football-mad country to their second world championship.

In the space of one famous month that summer under the hot Mexican sun, Maradona captured an entire planet’s imagination with his seemingly unstoppable, slalom-like runs into the opposition’s penalty box, the magic of his left foot, and the striking originality of his playmaking.

Take nothing away from the likes of Jorge Valdano and Jorge Burruchaga, but if ever a World Cup was won single-handedly on the back of one player’s soaring brilliance, it was this one. Maradona, a villain in 1982 for getting sent off needlessly and bitterly disappointed after just missing out on the squad for 1978 as a 17-year-old prodigy, delivered his country its second World Cup, scoring five goals, setting up several others including the winner in the final against West Germany and dominating games with his wizardry, skill and vision.

Wherever football was played in its aftermath, that 4-syllable name, ‘Maradona’, became a byword for an attacking player tormenting and even embarrassing his defensive opponents. But of course, no one ever did it quite like the diminutive Argentine number 10.

And the other famous number 10, Pele of Brazil, with whom he is regularly paired as the two greatest footballers of all time, has reacted to the Argentine’s passing by tweeting:

"What sad news. I lost a great friend and the world lost a legend. There is still much to be said, but for now, may God give strength to family members. One day, I hope we can play ball together in the sky."

Staying with great footballers, Portuguese ace Cristiano Ronaldo, along with Lionel Messi regarded as the two greatest players of the current generation, tweeted his own tribute to Maradona, insisting the world will never forget him.

"Today I say goodbye to a friend and the world says goodbye to an eternal genius. One of the best ever. An unparalleled magician," he wrote. "He leaves too soon, but leaves a legacy without limits and a void that will never be filled. Rest in peace, ace. You will never be forgotten."

France striker and World Cup winner Kylian Mbappe, who dazzled the world in the 2018 edition in Russia as a teenager, also gave thanks to Maradona for everything he has done in the sport.

"RIP Legend. You will stay in the history of football forever. Thank you for all the pleasure you gave to the whole world," he said on Twitter.

Politicians and leaders have also been weighing in.

The Argentine government has declared three days of mourning. President Alberto Fernandez said in a tweet, “You took us to the highest point in the world, and made us immensely happy. You were the greatest of all. Thank you for having been with us, Diego. We will miss you all our lives.”

A wake would take place at Casa Rosada presidential palace from Thursday until Saturday, a government spokesman said.

Pope Francis, an Argentine and a football fan, was remembering Maradona in his prayers, the Vatican said.

One of the most poignant tributes has been from Brazil's former president Luiz Inácio Lula da Silva, aka Lula, who posted on Instagram a picture of the two together. Maradona, an intensely anti-imperialist and anti-capitalist figure who had tattoos done of Cuban leader Fidel Castro and Che Guevara on various body parts, was a big admirer of the Brazilian Workers' Party's former leader, who wrote in the caption:

"Diego Armando Maradona was a football giant, for Argentina and for the whole world, a talent and a unique personality. His genius and passion on the field, his intensity in life and his commitment to Latin American sovereignty marked our time.”

Apart from the astonishing peak with the Argentina national side, Maradona is also credited with transforming the fortunes of one of Italy’s oldest clubs, in what was at the time the toughest domestic football league in the world.

The Argentine had arrived in Naples, then the poorest city in Italy (some say Western Europe), to play for unheralded S.S. Napoli in 1984, after an unhappy stint at Spanish giants Barcelona, who had signed him for a then-world record fee.

Almost unthinkably, from 1986-89, Napoli, who had never won a major title previously, were twice crowned champions of Serie A, the Italian top division, and won a European trophy to boot, the now defunct UEFA Cup.

By all accounts of this period, his brilliance on the football pitch was matched by turmoil away from it, with paternity suits, a spiralling cocaine addiction, and rumoured tie-ups with the Camorra, the Neapolitan mafia.

Maradona, the quintessential flawed genius, seemed to thrive on it all. Until his luck caught up with him, and he tested positive for cocaine during a routine test in 1991 while playing for Napoli, which followed the disappointment of failing to defend the World Cup with Argentina the previous summer. Banned for 15 months, he would never play in Italy again.

Nevertheless, he remains idolised to this day in the Italian city, where Maradona-inspired street art and graffiti have long been tourist attractions. And following his death, the mayor of Naples, Luigi de Magistris, called for the team’s stadium to be renamed after the player.

“Diego made our people dream, he redeemed Naples with his genius. In 2017 he became our honorary citizen, Diego, Neapolitan and Argentine, you gave us joy and happiness! Naples loves you!” he wrote on Twitter.

Maradona is also the single-biggest reason why every four years since 1986, as another football World Cup approaches, great swathes of Bangladesh become draped in the blue-and-white striped flag of Argentina, as tens of thousands, maybe lakhs, of Argentina supporters come out in force to show their support for the team from a nation halfway across the planet, to which the vast majority have no connection whatsoever. The two countries don’t even have embassies in each other’s territory.

And yet their passion for the Albiceleste, as the Argentine football team is affectionately called, is possibly no less than that of the South American nation’s own citizens. That is the power of Maradona’s appeal, his place in people’s hearts. And today, Bangladeshis throughout the length and breadth of the country will surely be sharing their thoughts on their hero’s passing.