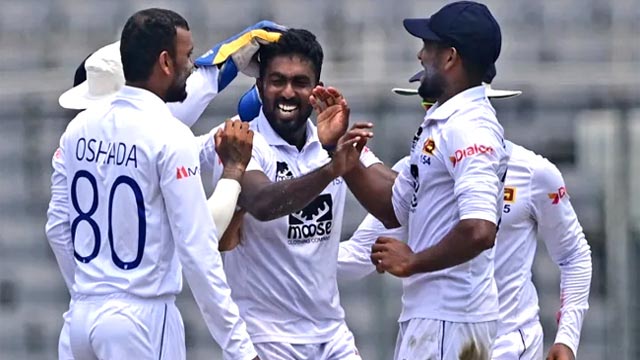 Batting failure in both innings and resilient bowling from the Sri Lankan pacers condemned Bangladesh to a convincing 10-wicket defeat in the fifth day of the Dhaka Test on Friday.

With the defeat, Bangladesh also lost the two-match series 0-1 as the first Test in Chattogram had ended in a draw.

Sri Lankan pacer Asitha Fernando was the star of the final day as he claimed his maiden five-wicket haul in Tests, finishing with 6-51, to rip through Bangladesh’s batting line-up in the second session. He finished with match figures of 10-144.

In the morning session, Liton Das and Shakib Al Hasan gave Bangladesh hopes of saving the match by adding 97 runs in the session after the loss of Mushfiqur Rahim for 23 early in the day.

Their partnership made sure Bangladesh avoided the follow on and allowed the hosts head into Lunch break with an eight-run lead.

But Asitha crushed Bangladesh’s hopes of drawing their first ever Test series against Sri Lanka. He claimed four wickets in quick succession as the hosts lost their remaining five wickets in the session for just 20 runs.

The collapse started when Asitha brilliantly caught Liton off his own bowling to remove the wicketkeeper-batsman for 52.

Shakib also followed his partner to the stands for 58, when his attempt to pull Fernando didn’t come off and he ended up giving a simple catch to the wicketkeeper.

Bangladesh lost the last three wickets for no runs as Mosaddek Hossain (nine) got trapped LBW by Ramesh Mendis and Asitha dismissed Taijul Islam and Khaled Ahmed in consecutive deliveries for ducks to complete the demolition.

Earlier, Mushfiqur Rahim and Liton Das made 175 and 141 respectively to power Bangladesh to 365 in the first innings. Their partnership of 272 runs saved Bangladesh from ignominy after the team had collapsed to 24-5 within the first 40 minutes of the game.

In reply, Angelo Mathews struck his second century in the series, this time an unbeaten 145, while Dinesh Chandimal made 124 as Sri Lanka scored 506 in their reply and earned a 141-run lead.