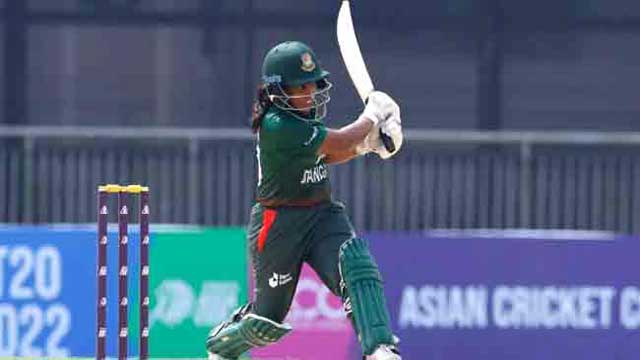 Bangladesh began their title defence of the Women's Asia Cup in style with a crushing nine-wicket win over Thailand in the opening match of the eighth edition of the tournament at the Sylhet International Cricket Stadium on Saturday.

Shamima, who hit 10 boundaries in her innings, was bowled around her legs one run away from a richly-deserved half-century.

Fargana Hoque remained unbeaten on 26 while skipper Nigar Sultana Joty was not out 10.

Earlier, Thailand elected to bat first after winning the toss.

After losing two wickets for 16, opener Natthakan Chantham and Phannita Maya (coming at four) stitched together a stand of 38 off 37 balls in the third wicket.

However, Bangladesh’s bowling attack came firing in cylinders afterwards. Rumana Ahmed's three-wicket-haul alongside a couple of wickets each from Nahida Akter, Sanjida Akter Meghla and Shohely Akhter bundled out Thailand for 82 in 19.2 overs.