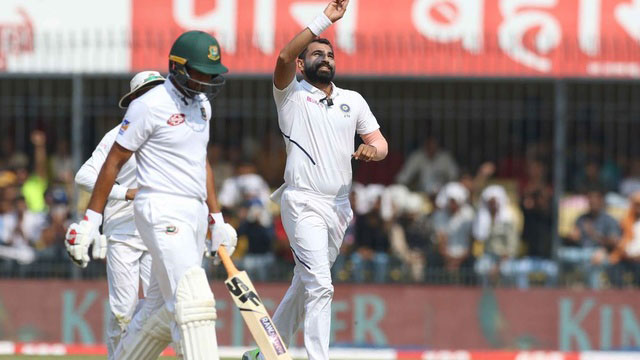 Bangladesh suffered a distressing defeat in their first Test of the World Test Championship against India by an innings and 130 runs on Saturday at Hokar Stadium in Indore.

After losing the T20 series 2-1 against the same opponent, Tigers expected to bounce back in the Test series. In the first attempt, they left the field with the heartbreaking defeat against one of the best teams in the world- India.

After winning the toss, Bangladesh opted to bat first but they failed to impress with the bat as they tumbled for 150 runs in the first innings. They never recovered from this downfall.

India scored 493 runs for six wickets (declared) in 114 overs in their only innings of the game and secured a 343-run lead. MayankAgarwal smashed his double-ton in this innings. He ended on 243 off 330 with 28 fours and eight sixes, which was later proved to be the match-winning performance for India.

Bangladesh tumbled for 213 in their final innings, with Mushfiqur Rahim posted 64 off 150 balls with seven four, but his effort went in vain at the end of the game.

In both innings, Bangladesh suffered most from the pace-attack of India comprising Ishant Sharma, UmeshYadav and Mohammad Shami. They completely outplayed the Tigers batting line which has missed Shakib Al Hasan and TamimIqbal enormously.

In the first innings, Shakib bagged three wickets conceding only 27 runs while Umesh and Ishant scalped two wickets each.

Bangladesh’s top-order failed to offer any sort of resistance in the game. Imrul Kayes and Shadman Islam, the opening pair of the Tigers in this game, contributed scoring only 24 runs.

The middler-order was vulnerable in the important moments as well. Mominul Haque, the stand-in captain of Bangladesh, failed to lead the team from the fronts.

He scored 37 in the first innings but failed to come up with the same effort in the second. Mohammad Mithun and Mahmudllah Riyad were also below-per in this game.

However, Mushfiqur scored 43 in the first innings before recording a fifty in the second. But at the end, his good run against India went under the radar due to the dismal show from his teammates.

The only positive that Bangladesh can take forward from this game is Abu JayedRahi’s bowling. He picked up four wickets in the game which is now his best bowling figures in Test cricket.

The second and final Test of the series will take place in Kolkata from November 22, which will be the first day-night Test of both participating teams.