Mashrafe wants to play with 14 stitches in hand 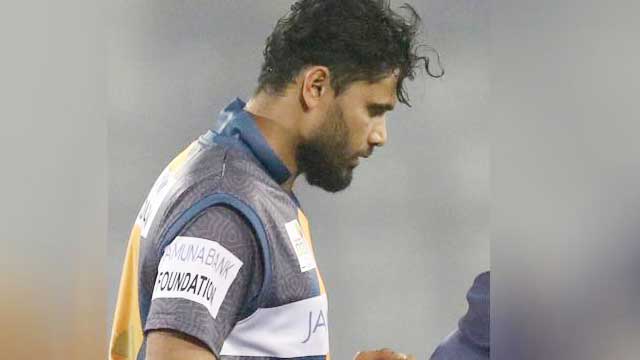 Despite having 14 stitches on his left hand, Dhaka Platoon captain Mashrafe Bin Mortaza wants to play the eliminator game of his team against Chattogram Challengers on 13 January at Sher-e-Bangla National Cricket Stadium in Dhaka, reports UNB.

Mashrafe sustained the blow during the 11th over of Khulna Tigers’ innings on Saturday evening in a BPL match. Mehedi Hasan was bowling and Rilee Rossouw was at the strike. Mashrafe jumped to take catch off Rossouw but failed. The ball hit his left palm horribly.

The Platoon captain had to walk back off the field. The Platoon management confirmed that Mashrafe had to take 14 stitches on his injured hand. Despite this blow, the pacer wants to play the next game.

“We are not sure what to do. But Masrhafe is willing to play the next game. He is a fighter, we are now waiting to see what he finally does,” Ahsanullah Hasan, the team manager of Platoon, told the media.

Chief physician of Bangladesh Cricket Board (BCB) Debashis Chowdhury said that they can manage a special treatment for Mashrafe so that he can take part in the next game, but he also said this sort of injury takes more than seven days to be healed.

“In case of this sort of injuries, we usually prescribe to do nothing for at least three days. It can take more than seven days to be healed. But if he wants to play, we can manage a special treatment so that he can play one match,” Debashis told the media.

Mashrafe played all 12 matches in the league phase of this BPL and took eight wickets at an economy rate of 7.56.

His team Platoon won seven of their 12 matches in the league phase and secured a playoff berth as the fourth team. If they lose the next game, they will end the BPL as fourth team as well. But if they win, they will advance to Qualifier 2 where they get the loser of the Qualifier 1 as their opponent.