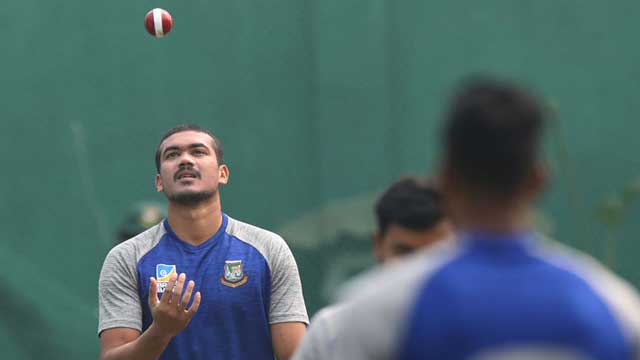 The absence of leading spinner Shakib al Hasan is having a significant effect on the Bangladesh spin bowling department, left-arm spinner Taijul Islam has said.

Taijul made the comment on the sidelines of the Bangladesh squad’s opening practice session ahead of the Zimbabwe Test on Tuesday. The Test match is scheduled to get underway at Mirpur Sher-e-Bangla National Cricket Stadium in Dhaka on Saturday.

Shakib is currently serving a one-year ban for failing to report multiple corrupt approaches from a bookie, and his suspension has coincided with the Tigers’ poor run of form in recent times.

Bangladesh have suffered five innings defeats in their last six games in the longest format.

Shakib is the leading wicket-taker in Tests for Bangladesh, both at home and away. The left-arm spinner, who played his last Test against Afghanistan at Zahur Ahmed Chowdhury Stadium in Chittagong last September, has 142 wickets in 63 innings at home and 68 wickets in 32 innings away.

Of the last six Test matches for Bangladesh, Shakib has played just one – against the Afghans. The Tigers lost that game by a small margin, with Shakib bagging seven wickets in two innings.

“Probably, we are not good spinners. We are not like Shakib bhai, that is the truth and that is my answer. If Shakib bhai played [in the last five Tests], our results would have been better. We need players like Shakib bhai, but we do not have a player of that quality now,” Taijul told the media in Mirpur.

"Irrespective of the opponent, we must win a Test. It is very important to win the Test [against Zimbabwe]. If we can win, our confidence level will increase, which is really crucial for us at the moment,” he added.

Zimbabwe are surely keeping close tabs on the opposition and under this situation will be looking to repeat the result from 2018 in Sylhet where Bangladesh lost by 151 runs on day four.

Taijul said they are well aware of the threat posed by the African nation, who triumphed over the Tigers in their last Test encounter in 2018. Bangladesh lost the match by 151 runs on day four in Sylhet.

“I won’t say that was an accident [the loss against Zimbabwe in Sylhet]. An accident is a different thing. We played badly and we lost. We played well in the next match [in Dhaka] and we won [by 218 runs] and it was not like an accident. We have to play good cricket to win or we will lose,” said Taijul.

Taijul recorded his career best Test bowling figures of 8/39 against the Zimbabweans in Mirpur six years ago.

“You have to land the ball in the right areas, regardless of who the opponents are. If you can't bowl well, the Zimbabwe batsmen would hit you. When we play in home conditions it gives us some relief, and everybody wants us to win when we play at our home. I think it is natural to do well at home,” Taijul further said.