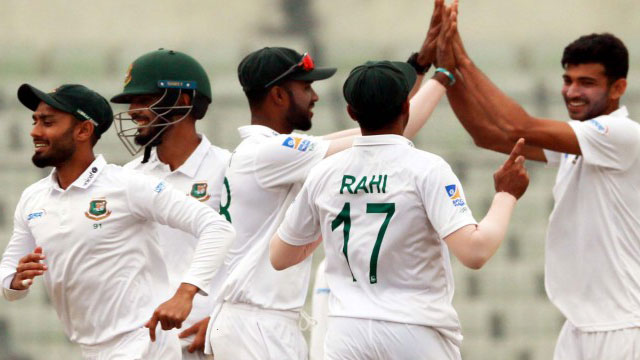 Off-spinner Nayeem Hasan claimed 5-82 in the second innings and finished with a match haul of nine wickets to guide Bangladesh to an innings and 106-run win over Zimbabwe in the one-off Test in Mirpur on Tuesday.

Nayeem and left-arm spinner Taijul Islam (4-78) shared nine wickets between them as Bangladesh bowled out Zimbabwe for 189 runs, ending their six-match losing streak in this format.

This was Bangladesh’s only second innings margin win in Tests and first since they defeated West Indies by an innings and 184 runs in 2018 in Mirpur.

Bangladesh got the first success on the fourth day courtesy of Taijul after Zimbabwe resuemed on 9-2 when he forced Kevin Kasuza to give a catch at second slip to Mohammad Mithun for 10.

Nayeem then dismissed Brendan Taylor in his first over of fourth day after Taylor tried to play an ambitious shot and was caught at square leg for 17.

Skipper Craig Ervine and Sikandar Raza then put a 60-run stand for the fifth wicket to take Zimbabwe past 100-run mark before Ervine was run-out for 43.

Mominul Haque accomplished the run out with a direct throw from point after Raza set off for a single and Ervine was late to respond.

Timycen Maruma and Regis Chakabva then added 44 runs for the seventh wicket to make Bangladesh wait for their win.

Taijul broke the stand removing Chakabva for 18 as Tamim took a spectacular catch at mid-on.
Nayeem then took the wickets of Ainsley Ndlovu (four) and Maruma (41) to complete his second five-wicket haul in Test cricket.

Taijul wrapped up the contest by trapping Charlton Tshuma for three to secure the win before the tea break.

Bangladesh earlier on Monday declared their first innings at 560-6, with a handsome 295-run first innings lead after Mushfiqur Rahim (203 not out) and Mominul (132) both struck their respective hundreds.

Zimbabwe were folded for 265 runs in their first innings with Ervine top-scoring for 107 runs.