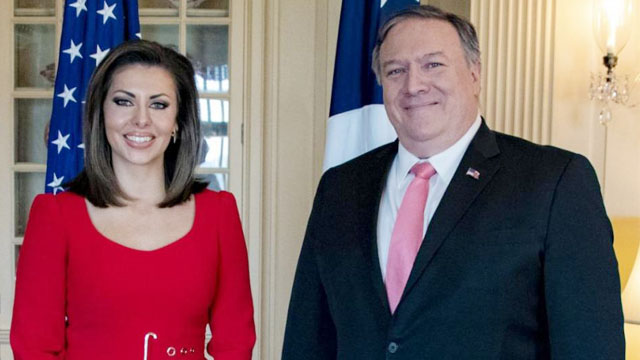 The US Secretary of State Michael Pompeo said in a statement on Wednesday said, “I am pleased to welcome Morgan Ortagus as our new State Department spokesperson.”

“Morgan brings outstanding credentials and a record of public service to the position. She has worked her entire career in financial services, consulting and diplomacy,” said Secretary of State.

Ortagus will be replacing Heather Nauert, also a Fox News alumnus, who held the position for two years before President Donald Trump picked her to head the Fulbright Program.

“Thank you, President Trump and Secretary Pompeo for the opportunity to represent the State Department and the American people,” Ortagus said in a tweet. “I look forward to helping to tell American's story to the world.”

“She is an active U.S. Naval Reserve Officer, and was co-founder and Managing Director of GO Advisors, and a national security contributor at Fox News. Morgan also helped found EY’s Geostrategic Business Group, and she was a Global Relationship Manager at Standard Chartered Bank in the Public Sector Group covering clients in Africa, Asia, and the Middle East,”  it added.

Previously, Morgan was an intelligence analyst at the Department of Treasury and began her government service at the U.S. Agency for International Development, where in 2007 she spent several months in Baghdad, Iraq. After serving in Iraq, she was assigned to Riyadh, Saudi Arabia, in 2010 as the Deputy U.S. Treasury Attache to the Kingdom.

The statement further said, “Morgan will no doubt help the State Department fulfill its mission of promoting and defending the Administration’s foreign policy priorities for the American people and among the international community.”