UN to look into letter of human rights bodies: Dujarric 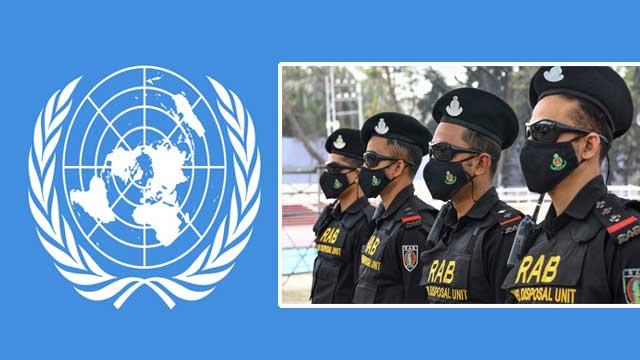 Stéphane Dujarric, Spokesman for the Secretary-General, has said that they will look into the letter of 12 international human rights organizations demanding a ban on Bangladesh’s elite force Rapid Action Battalion from UN peacekeeping.

He made this comment in reply to questions on the letter from UN correspondent M Mushfiqul Fazal and Al Jazeera’s Diplomatic Editor James Bays.

Responding to questions on the letter on Thursday, Stéphane Dujarric said, “We have seen the letter. We have read it. We will take a look at it and the facts given to us.”

In briefing, M Mushfiqul Fazal said, “I will just supplement mine to earlier Jame's question about these [inaudible] international organizations letter to the UN today to ban the Rapid Action Battalion from UN deployment. In this letter, [Kerry Kennedy of the Robert F. Kennedy Foundation] mentioned this evidence is clear, now it's time for the UN to draw a line. Do you agree with that?”

Stéphane Dujarric said, “We have seen the letter. We have read it. We will take a look at it and the facts given to us. Our colleagues in the peacekeeping department take human rights violations extremely seriously, and that is why over the years, we have continued to improve and increase our human rights screening.”

Earlier, Al Jazeera’s Diplomatic Editor James Bays said, “A letter from 12 human rights organizations to the Under‑Secretary‑General for Peacekeeping Operations, urging that Bangladesh's paramilitary group, the Rapid Action Battalion, be banned from UN peacekeeping. As you will be aware, the US has already sanctioned this part of the Bangladesh military. Is the UN concerned? Is the UN considering action?”

In reply the Spokesman said, “The UN, I mean, we just received the news of this. We will obviously be taking a look at it. I would remind you that we do have a pretty stringent human rights screening policy that applies to individual units from every country. But, we, obviously, have been taking very seriously what is being done.”

James further said, “So, given what these human rights organizations are saying, it can't be that stringent if this battalion is still involved in UN peacekeeping?”

As I said we will take a look, said the Spokesman.