UN General Assembly meets on the Russian invasion of Ukraine 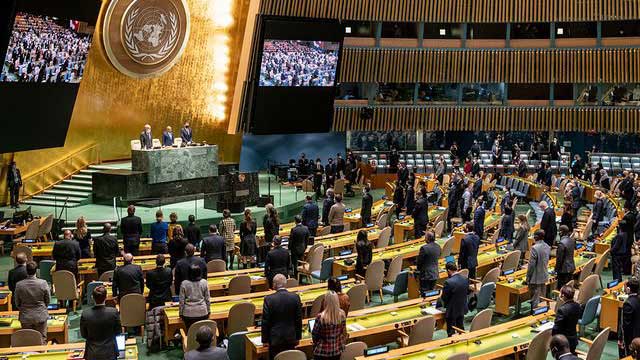 Delegates stand for a moment of silence during an emergency session of the UN General Assembly, on February 28, at the United Nations Headquarters in New York. (John Minchillo/AP)

The United Nations opened a rare emergency special session of the General Assembly on Monday to discuss Russia's invasion of Ukraine by observing a minute of silence for those killed in the conflict.

Russia is due to find out just how isolated it is on the world stage during the meeting, only the 11th time in the UN's history that such a session has been held.

Assembly president Abdulla Shahid led all of the UN's 193 members in the moment of meditation before calling for "an immediate ceasefire."

More than 100 countries were expected to speak as the global body decides if it will support a resolution condemning Russia's "unprovoked armed aggression" in Ukraine and demanding its immediate withdrawal.

"The fighting in Ukraine must stop," warned UN Secretary-General Antonio Guterres as the session began.

"Nothing can justify the use of nuclear weapons. The guns are talking now, but the path of dialogue must always remain open," he pleaded.

A vote on the resolution may not come until Tuesday. Its authors hope they may exceed 100 votes in favor -- though countries including Syria, China, Cuba and India are expected to either support Russia or abstain.

It will be seen as a barometer of democracy in a world where autocratic sentiment has been on the rise, diplomats said, pointing to such regimes in Myanmar, Sudan, Mali, Burkina Faso, Venezuela, Nicaragua -- and, of course, Russia.

If Moscow wins in Ukraine, the international order could be "changed forever," one senior diplomat told AFP on condition of anonymity, underscoring the gravity of the moment at the body charged with global peace and security.

Since then Russia has become an international pariah as its forces do battle on the streets of Ukraine's cities, facing a barrage of sanctions including a ban from Western airspace and key financial networks.-AFP