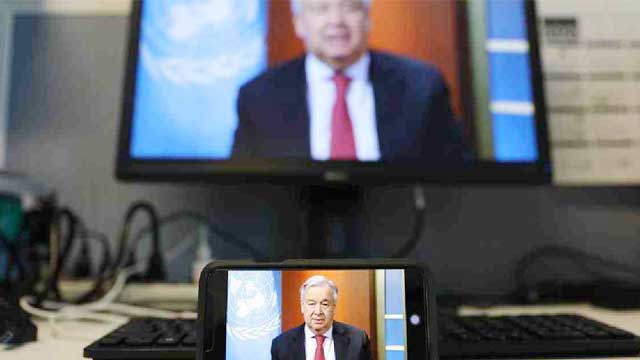 United Nations Secretary-General Antonio Guterres said Friday that the international community should focus only on the battle against its common enemy of the COVID-19 pandemic, which is sweeping the entire world and bringing tremendous socio-economic impacts.

"The global ceasefire appeal is resonating across the world," Guterres said at a virtual press briefing.

Ten days ago, the UN chief had called for an immediate ceasefire "in all corners of the globe" to reinforce diplomatic action, help create conditions for the delivery of lifesaving aid, and bring hope to places that are among the most vulnerable to the COVID-19 pandemic.

"The pandemic is having profound social, economic and political consequences, including relating to international peace and security," he said at the briefing. "There should be only one fight in our world today: our shared battle against COVID-19."

According to the UN chief, his global ceasefire appeal has been endorsed by "an ever-growing number of member states, some 70 so far, regional partners, non-state actors, civil society networks and organizations, and all UN messengers of peace and advocates for the Sustainable Development Goals."

"Religious leaders... have added their moral voice in support of a global ceasefire, as have citizens through grassroots mobilization online," the UN chief added.

"A substantial number of parties to conflict have expressed their acceptance for the call," he noted.

In the meantime, the UN chief pointed out that "there is a huge distance between declarations and deeds -- between translating words into peace on the ground and in the lives of people."

"There are enormous difficulties to implementation as conflicts have festered for years, distrust is deep, with many spoilers and many suspicions," he said. "In many of the most critical situations, we have seen no let-up in fighting -- and some conflicts have even intensified."

The secretary-general, therefore, called for "robust diplomatic efforts to meet these challenges."

"To silence the guns, we must raise the voices for peace," said Guterres.

Talking about the "intense diplomatic push," he cited a number of examples to illustrate his point.

"In Yemen, despite expressed support for a ceasefire by the government, Ansar Allah and many other parties -- including the Joint Forces Command -- the conflict has spiked," he said, adding that his special envoy for Yemen "is working on preparations to convene the parties to discuss COVID-19 crisis management and a nationwide ceasefire mechanism."

In Syria, where the first COVID-19 related deaths have now been reported, Guterres said his special envoy appealed for a "complete and immediate" nationwide ceasefire in the country to allow for an all-out-effort against COVID-19.

"The Idlib ceasefire previously negotiated by Turkey and the Russian Federation is holding," he said. "But it is essential that a permanent nationwide ceasefire take effect to allow for expansions in humanitarian access to all those suffering for the last decade."

Guterres also talked about the development regarding his ceasefire appeal in Libya and Afghanistan.

"I call on all those that can make a difference to make that difference: to urge and pressure combatants around the world to put down their arms," he said.

Talking about the urgency of ceasefire and fighting the pandemic, the secretary-general said "there is a chance for peace, but we are far from there. And the need is urgent. The COVID-19 storm is now coming to all these theatres of conflict."

"The virus has shown how swiftly it can move across borders, devastate countries and upend lives," said the UN chief. "The worst is yet to come."

"We need to do everything possible to find the peace and unity our world so desperately needs to battle COVID-19... We must mobilize every ounce of energy to defeat it," said Guterres.

The UN chief also told reporters at the virtual press briefing that a ceasefire is an opportunity for diplomacy for peace, for political negotiations, and for next steps to lead to permanent peace.

"The ceasefire has a value in itself to avoid people dying and to allow for the disease to be more effectively fought, but the ceasefire must be seen as a first step to permanent peace," Guterres noted.-AP