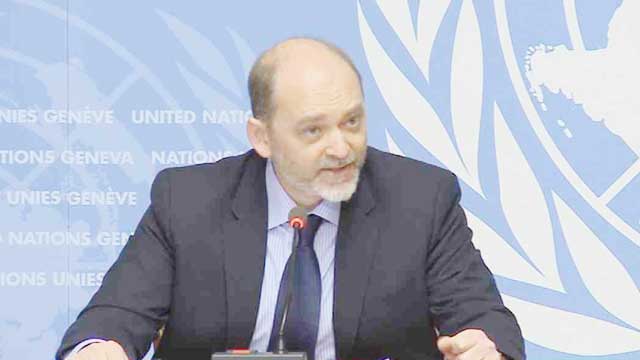 UNHCR, the UN Refugee Agency, has said there are serious concerns about the potentially severe impact of the virus in the densely populated Rohingya settlements in Cox's Bazar.

Another 400,000 Bangladeshis live in the surrounding host communities while Bangladesh is hosting over 1.1 million Rohingyas.

"These populations are considered to be among the most at risk globally in this pandemic," said UNHCR spokesperson Andrej Mahecic in Geneva on Friday.

No effort must be spared if higher fatality rates are to be avoided in overcrowded sites with limited health and water and sanitation infrastructure, said the UNHCR spokesperson.

UNHCR and partner organisations have further intensified their COVID-19 response in Rohingya camps following the first confirmed case of coronavirus among Rohingyas on Thursday.

Since March, UNHCR and partners have been supporting the Bangladesh primarily in COVID-19 preparation and prevention efforts.

With this first confirmed case, response mechanisms have now been activated and will require additional international support.

According to Bangladesh, one Rohingya refugee tested positive for COVID-19 in the Kutupalong settlement.

In addition, one member of the local Bangladeshi host community has also tested positive. Both had approached health facilities run by humanitarian partners, where samples were taken.

These were subsequently tested in the IEDCR Field Laboratory in Cox’s Bazar.

Following the laboratory confirmation, Rapid Investigation Teams have been activated to investigate both cases, initiate isolation and treatment of patients as well as tracing contacts, quarantine and testing of contacts as per WHO guidelines.

Testing began in Cox’s Bazar in early April. As of Thursday, 108 refugees have been tested.

In support of the government-led public health efforts to curb the spread and impact of the pandemic, since March UNHCR and partners have carried out a range of preparedness and prevention measures, according to UNHCR.

Established procedures have been put in place to respond to suspected and confirmed cases of COVID-19 in the host as well as refugee population of Cox’s Bazar, it said.

Health staff in all clinics within the camps have been oriented on Infection Prevention and Control (IPC), including the appropriate use of Personal Protective Equipment (PPE).

Over 3,000 refugee volunteers have received training on COVID-19 and work in the camps to ensure key messages are shared with refugees, including community health workers and protection community outreach workers, as well as Imams, community leaders and civil society groups, said Mahecic.

Despite the efforts that have been carried out to lay the ground to respond to the presence of COVID-19 in the camps, this response phase now requires concerted action and cooperation to ensure prompt treatment for patients, inform and communicate effectively with communities, and limit further spread, said the UN refugee agency.

Timely and flexible support from governments, private sector and individuals for ongoing refugee operations and host communities programmes as well as for COVID-19 response in Bangladesh and elsewhere remains critical.