Time for US to unite, President-elect Biden says 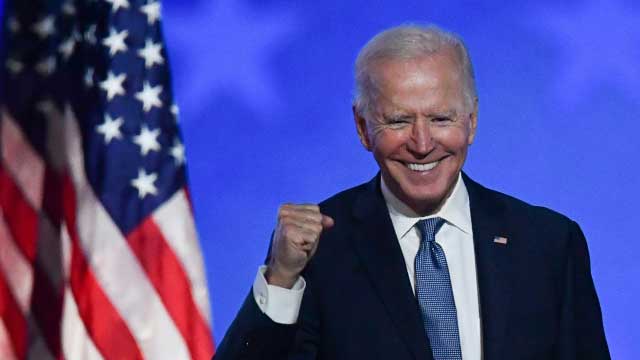 Joe Biden has won the race to become the next US president, defeating Donald Trump following a cliff-hanger vote count after Tuesday's election.

The BBC projects that Mr Biden has won the key battleground of Pennsylvania, propelling him over the 270 electoral college vote threshold required to clinch the White House.

The Trump campaign has indicated their candidate does not plan to concede.

Mr Biden said it was now time for America to "unite and heal".

"With the campaign over, it's time to put the anger and the harsh rhetoric behind us and come together as a nation," he said.

Record turnout in the face of "unprecedented obstacles", he said, showed democracy "beats deep in the heart of America".

His running mate, Kamala Harris, is set to become the first woman vice-president.

The result makes Mr Trump the first one-term president since the 1990s.

His projected wins in Pennsylvania and now also Nevada take him to 279 electoral college votes.

The election has seen the highest turnout since 1900. Mr Biden has won more than 74 million votes so far, the most ever for a US presidential candidate.-BBC