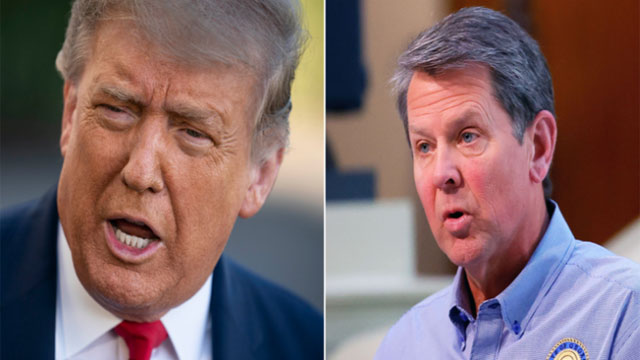 Trump asked Kemp to call a special session and convince state legislators to select their own electors that would support him, according to the source. He also asked the Republican governor to order an audit of absentee ballot signatures.

Kemp explained that he did not have the authority to order such an audit and denied the request to call a special session, the source said.

The White House declined to comment on the call, which was first reported by The Washington Post.

The President appeared to reference the call in a tweet Saturday that attacked Kemp and Georgia Secretary of State Brad Raffensperger and called for a signature audit of the absentee ballot envelopes in the state, while making false or misleading claims about the potential process. The governor, in response, tweeted that he has already "publicly called for a signature audit three times" -- leading Trump to then double down on his request for Kemp to call for a special session of the state's Legislature.

Kemp spokesman Cody Hall confirmed the governor spoke with the President, but, when asked about the conversation, only said that Trump offered his condolences on the death of Harrison Deal, a young Loeffler campaign staffer.

Trump's call to Kemp, his latest attempt to interfere in the results of the 2020 election, came hours before the President's visit to the state to rally in support of Republican Sens. David Perdue and Kelly Loeffler ahead of January's Senate runoff elections. CNN previously reported that the President has publicly pushed for Kemp and Raffensperger, both Republicans, to overturn the state's election results -- demands they have rebuffed.

Hall told CNN earlier this week -- following a separate push from Trump to intervene in the state's elections process -- that "Georgia law prohibits the Governor from interfering in elections."

"The Secretary of State, who is an elected constitutional officer, has oversight over elections that cannot be overridden by executive order," Hall said in a statement at the time. "As the Governor has said repeatedly, he will continue to follow the law and encourage the Secretary of State to take reasonable steps -- including a sample audit of signatures -- to restore trust and address serious issues that have been raised."

Despite the pummeling from their party leader, Georgia GOP election officials have pushed back against Trump's claims of fraud in the state.

Biden won Georgia by more than 12,000 votes, becoming the first Democratic presidential nominee to win the Peach State in nearly three decades. Kemp certified the results of Biden's victory on November 20, following a statewide audit, which included a hand-count of the nearly 5 million ballots cast in the election.

Trump had recently bashed Kemp, who is a supporter of his, as a "moron" and a "nut job" during another phone call. And earlier this week, the President publicly criticized the governor in an interview on Fox News, saying he was "ashamed" he had endorsed Kemp.

The governor does not plan to attend Trump's rally in Valdosta, Georgia, Saturday night, due to the sudden death of a close friend of the family, Hall told CNN.

At the Georgia rally, the President spent the majority of the early portion of his remarks falsely claiming he won the election, taking shots at Kemp and saying the Senate runoffs will be rigged.

As CNN previously reported, Republicans had been concerned that Trump could depress voter turnout among his base in the state's crucial runoffs if he continued to rail against Georgia's election system and attack Kemp -- exactly what Trump's done at the rally.

The President also ran through a litany of issues that he envisions with a Democrat-controlled Senate, including packing the Supreme Court, ending the filibuster, abolishing second amendment rights, and making Washington, DC, and other places, states to secure more Democratic votes in Congress.

Trump said that winning the two Senate seats in Georgia is the "last line of defense to save America," a tacit acknowledgment that he lost the presidential election.