'Great country!' Trump flaunts US military might at jingoistic jamboree 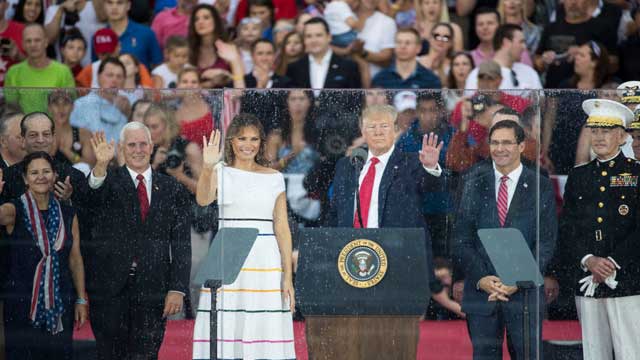 The US president’s unique interpretation of the declaration of independence was on full display on Thursday when he staged a militaristic, jingoistic and untraditional jamboree at the Lincoln memorial in Washington to celebrate the Fourth of July.

Trump did not fulfil his critics’ worst fears of a politically partisan, campaign-style rally with his “Salute to America” event. Indeed, in a rare plea for unity as he spoke beneath the statue of Abraham Lincoln, he told the crowd: “We are one people chasing one dream and one magnificent destiny. We all share the same heroes, the same home, the same heart, and we are all made by the same almighty God.”

The president did, however, provide the bombastic show of military might that had been widely predicted. Whereas he once liked to build suspense as host of the reality TV show The Apprentice, Trump now has the world’s most fearsome arsenal at his disposal – and he showed it off.

There were several more flypasts in the cloudy sky by the plane known as Air Force One when the president is aboard, as well as army, navy, coast guard and Marine Corps aircraft and, climactically, six Blue Angel F-18s. The controversial event also included two Abrams tanks and two Bradley fighting vehicles.

In a speech that lasted 47 minutes, Trump laboured over a heroic version of American military history, telling stories not only of the revolutionary war that won independence from Britain but the civil war (“Damn the torpedoes, full speed ahead!”) and the second world war. He summoned military leaders to the podium, paid tribute to gold star families and at one point referenced his proposed space force.

The president sailed close to one of his campaign lines when he claimed, “our nation is stronger than it ever was before”, but otherwise swerved past party politics for once. “For Americans, nothing is impossible,” he said, reciting a litany of American accomplishments over its history, including the moon landing 50 years ago, and promised “very soon, we will plant the American flag on Mars.”

Trump had repeatedly dismissed accusations that he was politicising an important holiday, emulating displays in authoritarian countries and wasting taxpayers’ money with the event, which the National Parks Service reportedly re-directed $2.5m in park entrance fees to help pay for.

Thousands of people had gathered on the national mall, many wearing “Make America Great Again” hats, and some waved “Trump 2020” banners. Occasional chants of “Trump! Trump! Trump!”, “Four more years!” and “We love Trump!” could be heard amid the constant thrum of military marching songs.

Tom Meehan, 56, a retired entrepreneur, said: “I felt very patriotic. I loved it. Everybody out here in the rain, one country again. I feel more united than ever before. I think it was really wonderful, heartfelt, warm.”

Meehan, a Trump supporter from Clearwater Beach, Florida, rejected the notion that the military was overplayed. “They’ve had military presence with our aircraft and tanks and all that before. President Kennedy had it, Eisenhower had it, a lot of Reagan had it, so it’s a tradition.”

But in a city that projects power through monuments, statues and its own Capitol, critics said it was the moment Trump went full Roman emperor, turning a traditionally nonpartisan day of events into a vanity project. Some observers have been tempted to see the military pomp not as a show of strength, but of weakness – a harbinger of imperial decline.

That also meant the plea for bipartisan comity was likely to fall on deaf ears. The congresswoman Eleanor Holmes Norton, who represents the District of Columbia, accused the president of “militarising” the traditional celebration of the Fourth of July and converting it into a “partisan political extravaganza”.

“Nothing could be more incongruous than seeing tanks on the [Washington national] mall,” she told CNN.

Pete Buttigieg, a Democratic 2020 candidate for president and a military veteran who served in Afghanistan, who has accused Trump of faking bone spurs to avoid the draft during the Vietnam war, told CNN: “Think about this, the strongest, toughest person that you know. It probably not somebody who goes around talking about how strong and tough he or she is, and I think it’s the same with countries.”

White House aides had reportedly struggled to draw crowds to the celebrations because arrangements for them had been made last-minute, with service chiefs for the army, navy, air force or Marine Corps set to skip the planned display of military might, sending their deputies instead.

Crowd size is a sensitive subject for the president. A government photographer edited official pictures of Trump’s inauguration to make the crowds seem bigger following a personal intervention from the president, according to investigative documents from the inspector general of the US interior department.

Trump had been angered on the first morning of his presidency by images showing his audience was smaller than Barack Obama’s in 2009. Trump’s White House had falsely claimed he had attracted the biggest ever inauguration audience.

On Thursday night, the president retweeted a post from supporter Charlie Kirk, founder and president of the group Turning Point USA: “Despite the left’s best attempts at destroying a salute to America, the place is PACKED! God bless Donald Trump and god bless America!”

Among the crowd in the Lincoln memorial grounds, however, was a lone protester who held a sign defiantly aloft. “Racist desecration of Lincoln memorial,” it said. “remember Abraham [Lincoln], Marian [Anderson, black singer who performed there] and Martin [Luther King, who delivered his “I have a dream speech” there]” On the back of the sign was a photo showing alleged abuse of children at the US-Mexico border.-The Guardian