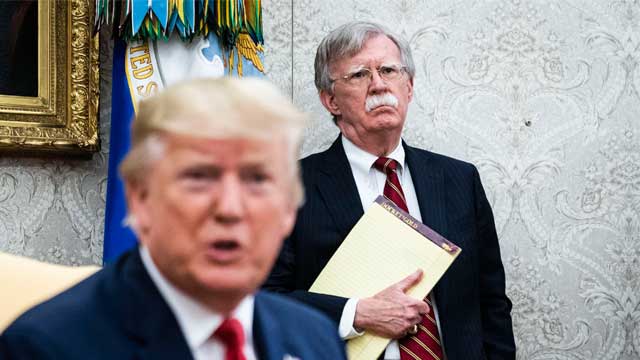 The US President Donald Trump has fired his National Security Adviser John Bolton.

"I informed John Bolton last night that his services are no longer needed at the White House," he wrote.

"I disagreed strongly with many of his suggestions," Mr Trump wrote, adding that a new national security adviser would be appointed next week.

The firing comes amid reports of divisions in the Trump cabinet over a cancelled peace plan to invite the Taliban to the US.

Mr Bolton, who had served since April 2018, was Mr Trump's third national security adviser after Michael Flynn and HR McMaster.

White House press secretary Stephanie Grisham told reporters: "[The president] didn't like a lot of his policies, they disagree."

According to a White House schedule, Mr Bolton had been due to host a White House briefing with Secretary of State Mike Pompeo and Treasury Secretary Steven Mnuchin just over two hours before Mr Trump tweeted that the national security adviser had been fired.

Sources said that the National Security Council, which advises the president, had become a separate entity within the White House under Mr Bolton.

A former senior Trump administration official, who wished to remain anonymous, told the BBC: "He [Bolton] operates separately from the rest of the White House.

According to the official, Bolton did not attend meetings, and followed his own initiatives.

"He's running his own show," said the official.

A White House official told the BBC's US partner, CBS News. "Bolton has his priorities. He didn't ask the president 'What are your priorities.' They're Bolton's priorities."

Mr Bolton had opposed peace talks with the Taliban, which Mr Trump scrapped at the weekend after inviting the group to the US.

Mr Trump's policy drew criticism especially because of its timing, close to the anniversary of the 11 September 2001 attacks by al-Qaeda, a group that the Taliban had hosted in Afghanistan.

On Monday, Mr Trump announced that peace talks with the Taliban were "dead" due to a deadly car bomb attack by the group which killed one American soldier and 11 others.

According to Foreign Policy magazine, Mr Bolton had argued that inviting a US-designated terror group to Camp David - the presidential retreat outside Washington - would "set a terrible precedent".

His opposition led to a growing rift with the secretary of state, who appeared on five separate news programmes on Sunday to defend Mr Trump's outreach to the Taliban.

"If you're going to negotiate peace, you often have to deal with some pretty bad actors," Mr Pompeo told ABC.

What has Bolton said?

Moments after Mr Trump's tweet, Mr Bolton took to Twitter to claim that he had offered his resignation a day earlier, but Mr Trump told him "lets talk about it tomorrow".

As the news broke, Mr Bolton texted Fox New host Brian Kilmeade while the latter was live on TV.

In separate tweets with Washington Post reporter Robert Costa, Mr Bolton maintained he had tendered his resignation on Monday night.

"I will have my say in due course," he said, adding "my sole concern is US national security".-BBC