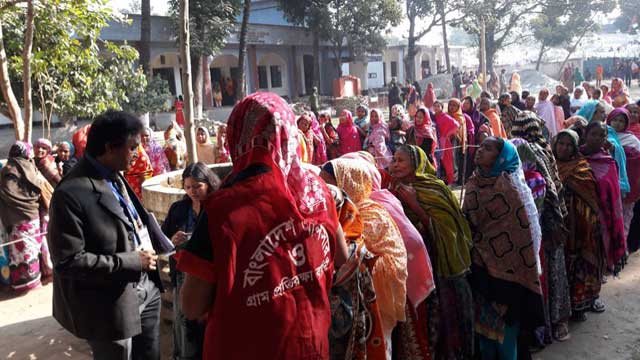 Rangpur, Dec 21 (Just News) : People are exercising their right to vote in the elections to Rangpur City Corporation without any major incident so far.

The number of presence of voters is increasing with the passage of time as the balloting in 193 polling stations started at 8:00am on Thursday.

It will continue till 4:00pm without any break. Of the polling stations, 128 are said to be vulnerable, or at risk of seeing violence.

A four-tier security measure having the presence of over 5,500 security personnel has been taken for peaceful voting.

The election is being held with the poll symbols of political parties amid a tripartite contest among Sarfuddin Ahmed Jhantu of Awami League, Mostafizur Rahman Mostafa of Jatiya Party, and Kawsar Jahan Babla of Bangladesh Nationalist Party.

The EC have two monitoring cells – one in Rangpur and another in the EC Secretariat—to watch the election continuously.

The commission sent its own observer team, numbering 22 officials, to monitor the polls.

Alongside over 5,500 law enforcers, 11 judicial magistrates and 33 executive magistrates will be in the election area to check any possible breaching of the election code of conduct and election violence.