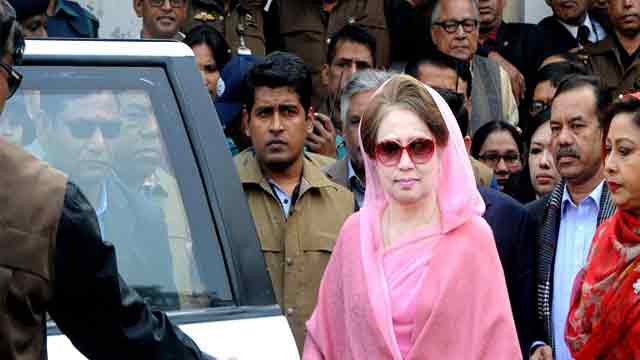 Dhaka, Jan 25 (Just News): BNP senior leader Khandaker Mosharraf Hossain on Thursday warned that their party will take to the streets if their Chairperson Begum Khaleda Zia is 'unlawfully' convicted in two graft cases filed against her.

Hours after a Dhaka court fixed February 8 to deliver verdict in the Zia Orphanage Trust graft case, the BNP leader came up with the threat at a discussion programme.

"We've been legally facing the cases filed against our chairperson. We would like to clearly say that if our leader is convicted in false and fabricated cases, we'll face it politically," he said.

Mosharraf, a BNP standing committee member, urged their party leaders and activists to get ready to take to the streets whenever the party calls them to foil the government's 'conspiracy' against Khaleda.

Meanwhile, the Special Court-5 in Dhaka fixed February 8 to deliver the verdict in the Zia Orphanage Trust graft case against Khaleda Zia and 5 others.

The Anti-Corruption Commission filed the Zia Orphanage Trust graft case on July 3, 2008 with Ramna Police Station accusing Khaleda Zia, her eldest son Tarique Rahman, now living in the UK, and four others of misappropriating over 2.10 crore that came as grants from a foreign bank for orphans.

On August 8, 2011, the commission filed the Zia Charitable Trust graft case with Tejgaon Police Station accusing four people, including Khaleda Zia, of abusing power in raising funds for the trust from unknown sources.

Mosharraf alleged that the government is conspiring against their chairperson to hold another lopsided election like the January 5, 2014 one for keeping her and her party out of the race.

"The country's people won't allow the government to hold the 11th parliamentary elections without BNP and Khaleda Zia," he said.

At another programme, BNP senior joint secretary Ruhul Kabir Rizvi said it will be disastrous if the BNP chairperson is convicted.

He said the government will not be able to weaken BNP by arresting and repressing its leaders and activists.

Rizvi warned that BNP leaders and activists will foil the government's any type of conspiracy against Khaleda even scarifying their blood.

Youth Forum, a pro-BNP platform, arranged the discussion at the National Press Club.