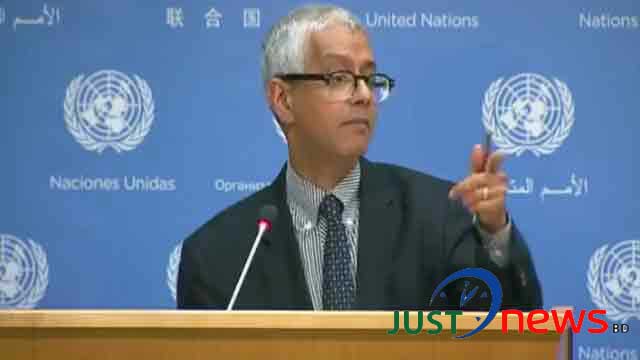 M Mushfiqul Fazal from the UN Headquarters, May 3 (Just News): Farhan Haq, the Deputy Spokesperson for the UN Secretary-General has said the United Nations hope that all political actors in Bangladesh will work together in a conducive environment for holding peaceful elections later in the course of this year.

The Deputy Spokesperson came up with this comment in reply to a question asked by a Bangladeshi journalist on Thursday.

At the daily noon briefing UN correspondent of the Just News BD asked “On International Press Freedom Day, as you mentioned, that this year’s theme is media and the justice and the rule of law. In particular, I'm asking about Bangladesh. The Bangladeshis far away from this thing, and the media is very much controlled by the ruling authority. Last recently, according to Reporters Without Borders, its position is 146 and last position in… even in South Asia. And the rule of law, you know, the country’s chief justice, forced to leave the country, and the rule of law, you’re aware that the main opposition leader in prison with a fabricated verdict, and Government banned one of the main opposition leader, Mr. Rahman speech in the Bangladesh media. Rather, Government is producing his private conversation in public with… using their Government machinery like Intelligence agency. So, with this position, what exactly Secretary‑General is doing to rescue Bangladesh from this darkness?”

In reply the Deputy Spokesperson Farhan said “As you're aware, we've made clear, including through the Secretary‑General, our hope that all political actors in Bangladesh will work together in a conducive environment for holding peaceful elections later in the course of this year.”

Obviously, in Bangladesh, as elsewhere, we want to make sure that the press can go about their work freely and without hindrance, and we would have concerns about any efforts to impinge on their rights, the spokesperson added.