SL build on lead after bowling out Tigers for 110 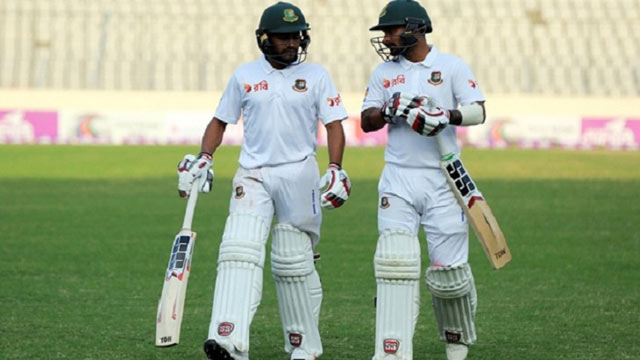 Dhaka, Feb 9 (Just News) : Bangladesh lost their last five wickets for three runs to get dismissed for 110 in the first innings of second Test against Sri Lanka in Dhaka on Friday.

Dimuth Karunaratne (29 not out) and skipper Dinesh Chandimal (4 not out) remained at the crease during the interval as they are eying to build on their lead.

Liton Das dragged his one short-pitch ball of Sunranga Lakmal onto his stumps to get bowled, providing Sri Lanka the opener in the morning after Bangladesh resumed on 56-4

Liton could add just one runs to his overnight 24 runs.

Debutant Akila Dananjaya triggered the Bangladesh collapse, first bowling out a confident-looking skipper Mahmudullah for 17 before forcing Sabbir Rahman to give a catch to Dinesh Chandimal at short mid-wicket in the same over.

Dananjaya then took a catch off his own bowling to remove Abdur Razzak to finish with 3-20 while Lakmal finished with 3-25.

Mehedi Hasan, who showed a positive intent in the morning hitting Rangana Herath for six, remained stuck on 38 not out.