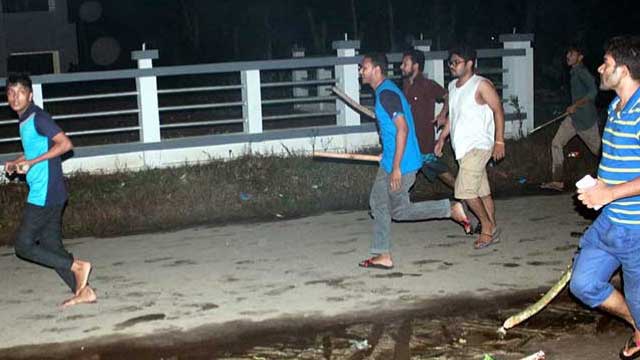 At least 10 people were injured in a factional clash between two groups of Bangladesh Chhatra League of Islamic University in Kushtia on early Monday over establishing supremacy on the campus.

Witnesses said that a group of 10 to 12 BCL activists, led by its general secretary Rakibul Islam Rakib, went to the room of Mosharraf Hossain Neel, loyal to former IU BCL unit general secretary Jewel Rana Halim, in Saddam Hossain Hall as he prohibited some activist to take part in the party’s programme.

At one stage, they were locked in an altercation.

Following the argument, two groups — one led by Rakibul Islam while the other by Alamgir Hossain Alo, loyal to Jewel Rana Halim — swooped on each other in front of Saddam Hossain Hall, leaving 10 BCL activists injured.

IU student advisor professor Paresh Chandra Barman along with the proctorial body came to the spot and brought the situation under control. They rescued the injured activists and sent them to Kushtia Sadar Hospital for treatment.

Mosharraf Hossain Neel claimed that Rakibul went to his room and assaulted him.

Rakibul, however, denying the allegation and said that he along with some activists went to Neel’s room to ask him why he prohibited the activists to participate in the party’s programme.