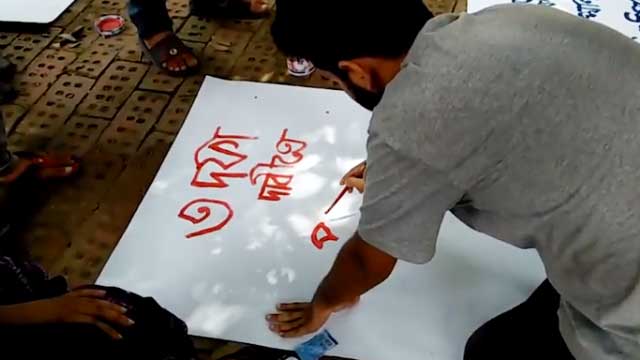 A section of students of Jahangirnagar University (JU) today besieged the administration building protesting what they said the ongoing unplanned development, corruption, and endangering bio-diversity.

The students gathered in front of the administrative building at 10:30am under the banner of a newly formed platform titled ‘Jahangirnagar Against Corruption’.

However, JU Vice Chancellor Prof Farzana Islam was not inside her office house in the building when the demonstration began.

The agitated students have been demonstrating on the campus since August 23 demanding the relocation of three male students’ dormitories which the authorities planned to construct near Rabindranath Hall, and judicial probe into the allegations of corruption and irregularities centring the mega project and endangering the bio-diversity.

President of Jahangirnagar Cultural Alliance Md Ashikur Rahman said the JU VC earlier claimed that the allegation brought against her was false and fabricated and also asked the demonstrators to probe the allegations.

“We are sincerely requesting the VC to prove herself innocent,” Ashikur said, vowing to continue the protest until their demands are not met.