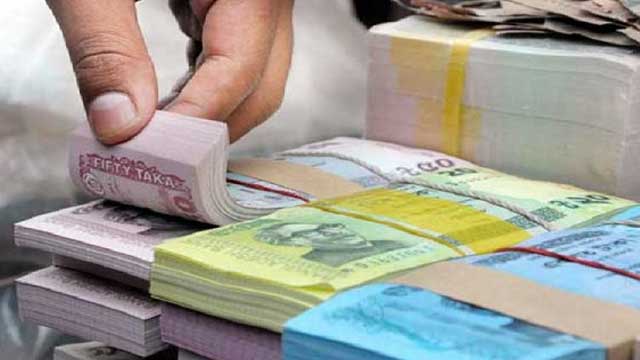 Six months into the fiscal year, the government has already borrowed nearly the entire target amount for the whole year.

Increasing expenses along with decreasing foreign loans has led the government to borrow from the banks.

According to experts, the crisis will get worse and the economy is likely to take a big hit as the bank’s money is being spent in unproductive sectors.

“Sadly, credit growth in the private sector is continuously decreasing,” he said before adding that due to revenue turnout not improving, government officials are being paid with the loaned money.

The government has set the loan target for the 2019-20 fiscal at nearly Tk 474 billion. However, within the first six months, nearly Tk 448 billion has been borrowed.

Meanwhile, according to the National Board of Revenue (NBR), revenue turnout reduced within the first four months of the fiscal.

Dhaka University Economics Department Professor MA Taslim says, “The government is not getting enough revenue, neither receiving foreign loans. Hence the government is completely dependent on the banking sector.”

According to Bangladesh Bank the government is receiving more loan than the private sector. As of Dec 17, the government owes over Tk 1500 million in debts to the banks.

PRI Executive Director Ahasan H Mansur says that if this continues, the private sector will not get enough loans.

He said, not only will the economy be negatively affected, inflation will rise and hence more focus should be given to increase revenue.
According to the central bank, as of the first four months of the July-October of the 2019-20 fiscal, the revenue deficit was nearly Tk 210 billion.

If the government’s budget is to be implemented, the NBR must achieve 45 percent growth. However, till now the growth has only been four percent.

A Bangladesh Bank report says that as of October this fiscal, credit growth was 10.04 percent which was 10.66 in September and 10.68 in August.

Association of Bankers Bangladesh Chairman Syed Mahbubur Rahman said that the private sector is at risk due to the government’s borrowing.

“The NBR can fulfill the target even if there seems to be a deficit now,” said NBR Chairman Md Mosharraf Hossain.

He added that initiatives have been undertaken to increase revenue.