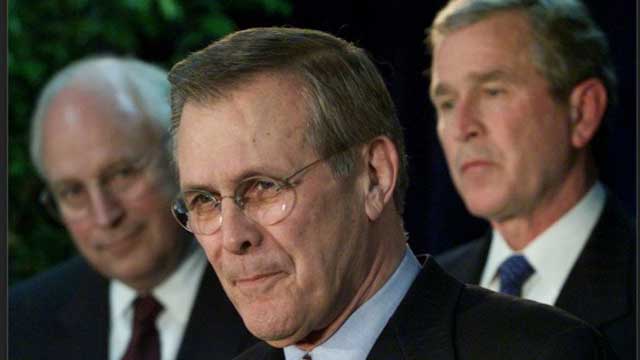 "It is with deep sadness that we share the news of the passing of Donald Rumsfeld, an American statesman and devoted husband, father, grandfather and great grandfather. At 88, he was surrounded by family in his beloved Taos, New Mexico," the family said in a statement released Wednesday.

The cause of Rumsfeld's death was multiple myeloma, according to his spokesman, Keith Urbahn.

President George W. Bush selected Rumsfeld for his second stint as Pentagon chief in 2001. Rumsfeld vowed to shake up the military bureaucracy, seeking to make it leaner and more agile.

The Sept. 11 terror attacks changed everything.

Rumsfeld oversaw the Pentagon’s response and its initial attack on al-Qaida bases in Afghanistan. With stunning speed, U.S. commandos and airstrikes toppled the Taliban from power, and a democratically elected government was established.

By early 2002, Rumsfeld and Vice President Dick Cheney turned the Pentagon’s attention to Iraq president Saddam Hussein. Al-Qaida chief Osama bin Laden, nearly captured in the mountains of eastern Afghanistan, slipped away into Pakistan, where he was killed in 2011.

In 2003, U.S. forces invaded Iraq to prevent Saddam from launching attacks with weapons of mass destruction. No such weapons were found, and the mismanaged American occupation led to a guerrilla war and sectarian violence.

Bush fired Rumsfeld in 2006 as the United States was mired in grinding insurgencies that killed and maimed thousands of U.S. troops and thousands more combatants and civilians in Iraq and Afghanistan. About 2,000 troops remain in Iraq supporting a fragile government fighting Islamic insurgents, and the last U.S. combat troops prepare to leave Afghanistan, where the top commander warns of a brewing civil war.

There were a series of high-profile controversies during his tenure, including the abuse of Iraqi prisoners at the Abu Ghraib prison. The detention at the military prison at Guantanamo Bay, Cuba, of combatants and others scooped up on battlefields in the Middle East continues to vex the United States. Most of the detainees have been released to host countries, but others await military trials.-USA Today