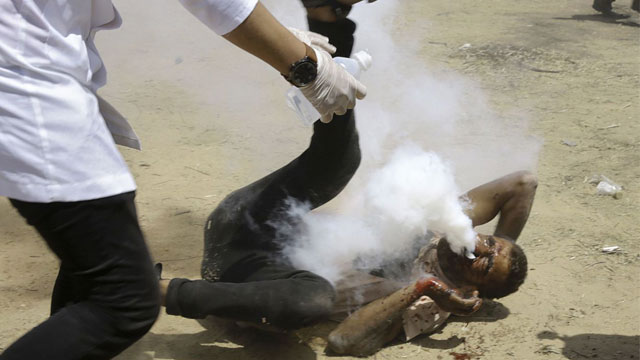 A Palestinian medic rushes to help a protester who was shot in the face with a tear gas canister fired by Israeli troops near the Gaza Strip's border with Israel, east of Khan Yunis, on Friday. (Adel Hana / Associated Press)

Israel said it was defending the frontier against crowds that threw stones and burned tyres in an attempt to cross. It said at one location at least two Palestinian militants fired guns at its forces and others had thrown grenades.

The protests tapered off around sunset when many demonstrators left border camps for the evening meal that breaks their fast during the Muslim holy month of Ramadan.

The Palestinians killed on Friday were three adult men and a 15-year-old boy, Gaza medics said. Of 620 people wounded, 120 were from live fire, they said.

Friday’s deaths bring the total number of Palestinians killed at the Gaza border to 124 since protests there began on March 30, including 60 people killed in a single day last month.

Palestinians say the protests are a popular outpouring of rage against Israel by people demanding the right to return to homes their families fled or were driven from on Israel’s founding 70 years ago.

Israel says the demonstrations are organized by the Islamist group Hamas that controls the Gaza Strip and denies Israel’s right to exist. Israel says Hamas has intentionally provoked the violence, a charge Hamas denies.

The Palestinian United Nations envoy condemned the Friday killings and said that representatives of the Arab Group and the Organisation of Islamic Cooperation had asked the president of the U.N. General Assembly to resume an emergency session to discuss a resolution aimed at protecting Palestinian civilians.

The General Assembly meeting was called for 3 p.m. EDT on Wednesday.

The resolution, Ambassador Riyad Mansour said, would be similar to a Kuwaiti-drafted resolution that last week received enough support to pass a vote in the Security Council but was vetoed by the United States.

Mansour said the U.S. veto triggered the request and that Friday’s violence “adds to our argument and to the urgency of providing international protection” to Palestinian civilians.

Among those wounded on Friday were an Agence France-Presse photographer and a 23-year-old man who was on life support after a tear gas canister penetrated his face, medical officials said.

The Israeli army said that it had repelled around 10,000 Palestinians who converged on five points of the border.

Organizers in Gaza said that the protests will continue in the coming days and weeks. They had tagged this Friday’s demonstrations as the “Friday of Jerusalem” to commemorate the 1967 war in which Israel captured East Jerusalem, with the West Bank and Gaza Strip.

The bloodiest day of the protests took place last month as the United States opened its embassy in Jerusalem after recognizing the city as the Israeli capital. Palestinians also want the capital of a state there, and most countries say the city’s status should be resolved in future peace talks.

“There is no such state called Israel that could have a capital called Jerusalem,” Hamas spokesman Fawzi Barhoum said in Gaza. He said the demonstrations would continue until Palestinians achieve their demand for a right of return to ancestral lands.

Around 2 million people live in Gaza, most of them the stateless descendants of refugees from what is now Israel.

The territory has been controlled by Hamas for more than a decade, during which it has fought three wars against Israel. Israel and Egypt maintain a blockade of the strip, citing security reasons, which has caused an economic crisis and collapse in living standards there over the past decade.

On Thursday Israel dropped leaflets in Gaza urging Palestinians not to take part in protests or try to breach the fence on Friday, “and not to allow Hamas to use you for its narrow factional interests, which Iran is inspiring”.

At one location on Friday, at least two Palestinians fired guns at an army post and others threw grenades or used helium balloons and kites to fly flammable materials or explosive devices over the border, the army said.

There have been no Israeli casualties from the more than two months of confrontations but farmland on the Israeli side has been damaged by fire from the kites and balloons.

“We are not asking for the moon,” said Amer Abu Khalaf, a 20-year-old business administration student who took part in Friday’s protest. He said it aimed to “break the siege and have the world recognize our right to return”.

Israel has long refused to admit Palestinian refugees, saying they belong in a future Palestinian state. Statehood talks have been frozen since 2014.-Reuters