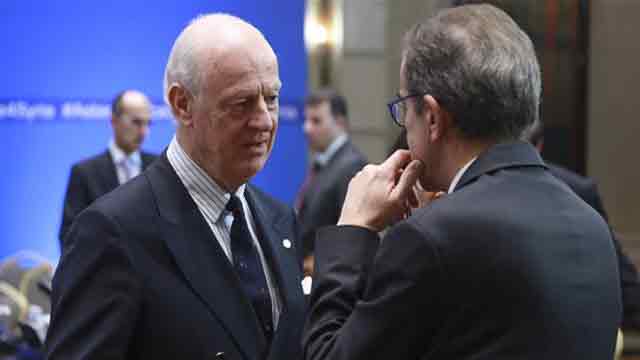 Sochi, July 31 (Just News): Delegations from the Syrian government and the political opposition have arrived in the Russian city of Sochi for talks on the war in Syria, which are spearheaded by Russia, Turkey and Iran.

The meetings, which began on Monday and will end on Tuesday, are held within the framework of the Astana diplomatic track, which is sponsored by the three nations and is separate to UN-led efforts in Geneva.

Among those attending the 10th round of the Astana-format talks in the Black Sea resort of Sochi are Staffan de Mistura, the United Nations' special envoy for Syria, and officials from Jordan.

Ahmed Tumah, the former head of the Syrian interim government, is representing the High Negotiations Committee, the main opposition bloc.

Bashar Jaafari, Syria's ambassador to the UN, is present on behalf of the Syrian government led by President Bashar al-Assad.

The talks will address various humanitarian issues, as well as the latest situation in the so-called "de-escalation zones" that once included four provinces.

Idlib, the last rebel-held stronghold in the country, is part of the Russian-brokered "de-escalation" agreements aiming to shore up ceasefires in parts of western Syria.

The province bordering Turkey is home to nearly three million people, including opposition fighters and their families.

The focus of the talks will also be on the return of Syrian refugees to the country, the release of
detainees and the establishment of a committee tasked with rewriting the Syrian constitution.

The main aims of both diplomatic tracks - Astana and Geneva - have been to achieve a political transition and a military ceasefire in Syria, but the main sticking point has been the fate of Assad.

While the Syrian government has consistently refused to agree to Assad stepping down, the opposition says his removal is a prerequisite to peace.

Talks for nearly years have utilised a two-year-old UN Security Council resolution endorsed by de Mistura as the basis for achieving a political transition plan.

The Geneva talks have been at a standstill for the past six months.

During the ninth Astana meeting held in May, all parties agreed to maintain the de-escalation zones that were meant to observe a ceasefire.

But since the start of 2018, forces loyal to Assad have retaken large swaths of land from armed opposition groups.

Backed militarily by Russia, the government launched two main offensives - in Eastern Ghouta, near the capital, Damascus and southwest Syria - despite both being designated as "de-escalation zones".

The government has since managed to relocate rebels to the north via a series of evacuation deals.-Al Jazeera