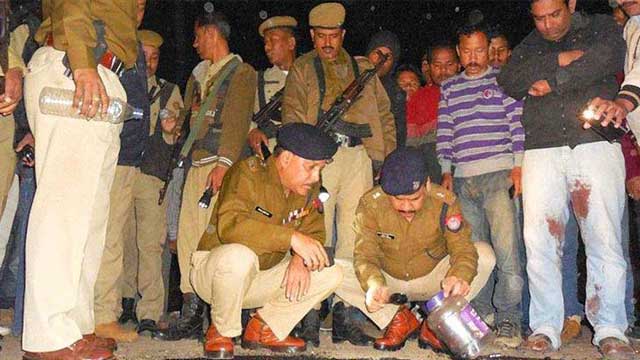 Assam, Nov 2 (Just News): At least five persons, including three of a family, were killed by suspected ULFA(I) gunmen in Bisonimukh village, in Tinsukia district of Assam, on Thursday night, police said. No militant outfit has claimed responsibility so far.

The victims have been identified as Shyamal Biswas (60), Ananta Biswas (18), Abhinash Biswas (23), Subal Das (60) and Dhananjay Namasudra (23). All of them are reported to be Bengali-speaking daily-wage workers.

According to sources, the gunmen reached the village around 8 pm, and called out the five persons from their houses. They took them to the banks of the Brahmaputra river, where they shot them, reports Indian Express.

An eyewitness told a local television channel that there were five-six gunmen, all dressed in battle fatigues.

The village is reported to be a Bengali-dominated area, mostly comprising farmers and daily-wage workers.

Special DGP (Special Branch) of the Assam Police, Pallab Bhattacharyya, told The Indian Express: “We suspect the hand of ULFA (I) or some combined militant group. Seven days back, there was an intelligence input about attacks in Bengali-dominated areas, but there was nothing specific.”

Condemning the killings, Chief Minister Sarbananda Sonowal said strong action would be taken against the perpetrators. State ministers Keshav Mahanta and Tapan Gogoi have been told to rush to the spot.

Assam Director General of Police Kuladhar Saikia was not available for comment.

West Bengal Chief Minister sought to link the attack to the National Register of Citizens in Assam. “Terrible news coming out of Assam. We strongly condemn the brutal attack in Tinsukia… Is this the outcome of recent NRC development,” she tweeted.

Last month, at least three persons were injured in a low-intensity blast in Sukleswar Ghat area in Guwahati. ULFA(I) Commander-in-Chief Paresh Barua had claimed responsibility for the blast, and said their motive was to warn “Hindu Bengali organisations, who are conspiring against Assam despite living in Assam and are protesting against the NRC”.

In the past, Hindi speakers have been targeted by suspected ULFA militants in Tinsukia. The district, which is home to people belonging to different communities, was rocked by insurgency in the 1990s.

Meanwhile, the All Assam Bengali Youth Student Federation’s branch in Tinsukhia has called a 12-hour bandh in the district on Friday.