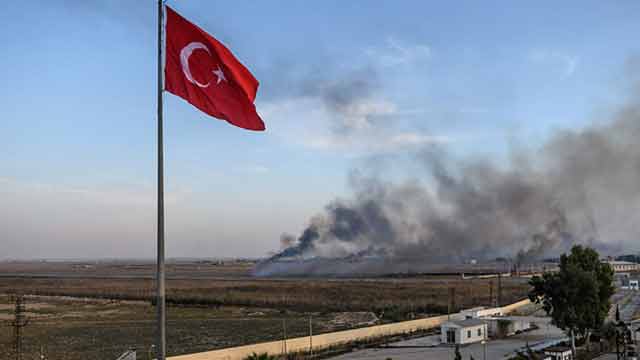 Many people are sheltering in schools or other buildings in Hassakeh city and the town of Tal Tamer, the UN says, reports BBC

Turkey took action on Wednesday after US President Donald Trump pulled American troops out of the area.

At least 11 civilians have died. Humanitarian groups say the number of people affected will rise further.

Dozens of fighters from the Kurdish-led Syrian Democratic Forces (SDF) and pro-Turkish factions have been killed. The first death of a Turkish soldier was confirmed by Turkey's military.

Analysts say the US withdrawal in effect gave Turkey the green light to begin its cross-border assault.

Much of the region has been outside the control of the Syrian government as a consequence of the civil war which began in 2011. It has been controlled by the SDF since 2015.

The SDF have been key allies of the US in the battle against the Islamic State (IS) group but Turkey regards the Kurdish militias of the SDF as "terrorists" who support an anti-Turkish insurgency.

Turkey defended its offensive as a bid to create a "safe zone" free of Kurdish militias which could also house Syrian refugees.

"We will not stop it no matter what anyone says," President Recep Tayyip Erdogan said on Friday.

One major concern for the international community is the fate of thousands of suspected IS prisoners, including many foreign nationals, being guarded by Kurdish-led forces in the region.

What's the latest on the fighting?

On Friday, IS said it had planted a car bomb that killed six people - civilians and members of the security forces - in the border town of Qamishli on Friday.

Meanwhile, US media report that an explosion occurred near a US base in Kobane, but no injuries have been reported.