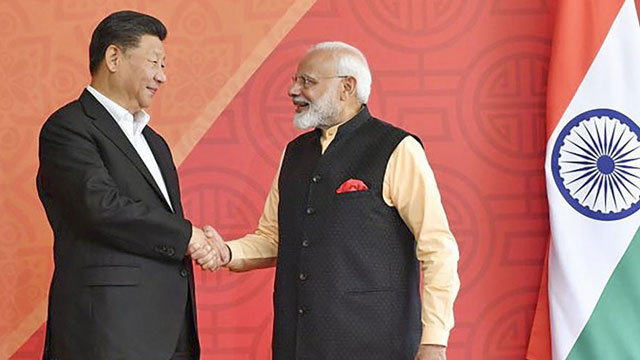 The informal meeting between Indian Prime Minister Narendra Modi and Chinese President Xi Jinping concluded on a cordial note on Saturday. Both leaders had arrived in Mamallapuram in Chennai on Friday to hold their second informal summit.

The two Leaders had an in-depth exchange of views in a friendly atmosphere on overarching, long-term and strategic issues of global and regional importance, according to Press Information Bureau (PIB), India.

They also shared their respective approaches towards national development. They evaluated the direction of bilateral relations in a positive light and discussed how India-China bilateral interaction can be deepened to reflect the growing role of both countries on the global stage.

Both Leaders shared the view that the international situation is witnessing significant readjustment. They were of the view that India and China share the common objective of working for a peaceful, secure and prosperous world in which all countries can pursue their development within a rules-based international order.

They reiterated the consensus reached during the first Informal Summit in Wuhan, China in April 2018, that India and China are factors for stability in the current international landscape and that both side will prudently manage their differences and not allow differences on any issue to become disputes.

The Leaders recognized that India and China have a common interest in preserving and advancing a rules-based and inclusive international order, including through reforms that reflect the new realities of the 21st Century. Both agreed that it is important to support and strengthen the rules-based multilateral trading system at a time when globally agreed trade practices and norms are being selectively questioned. India and China will continue to work together for open and inclusive trade arrangements that will benefit all countries.

Both Leaders also underscored the important efforts being made in their respective countries to address global developmental challenges, including climate change and the Sustainable Development Goals. They emphasized that their individual efforts in this regard would help the international community achieve the targets.

The PIB said, “Both Leaders are concerned that terrorism continues to pose a common threat. As countries that are large and diverse, they recognized the importance of continuing to make joint efforts to ensure that the international community strengthens the framework against training, financing and supporting terrorist groups throughout the world and on a non-discriminatory basis.”

“They shared the view that an open, inclusive, prosperous and stable environment in the region is important to ensure the prosperity and stability of the region. They also agreed on the importance of concluding negotiations for a mutually-beneficial and balanced Regional Comprehensive Economic Partnership,” PIB added.

“The two Leaders exchanged views on the age-old commercial linkages and people-to-people contacts between India and China in the past two millennia, including significant maritime contacts. In this regard the two leaders agreed on establishment of sister-state relations between Tamil Nadu and Fujian Province, exploring the possibility of establishing an academy to study links between Mahabalipuram and Fujian province on the lines of the experience between Ajanta and Dunhuang and conducting research on maritime links between China and India in view of our extensive contacts over the centuries.”

The two Leaders shared their mutual vision on goals for development of their respective economies. They agreed that the simultaneous development of India and China presents mutually-beneficial opportunities. The two sides will continue to adopt a positive, pragmatic and open attitude and to enhance appreciation of each other’s policies and actions in line with the general direction of their friendship and cooperation. In this regard, they also agreed to continue to enhance strategic communication on all matters of mutual interest, and to continue the momentum of high-level exchanges by making full use of dialogue mechanisms.

According to PIB, “The leaders were of the view that the positive direction of ties had opened up possibilities for taking bilateral relations to greater heights. They agreed that this endeavor also required strong public support in both countries. In this context the two Leaders have decided to designate 2020 as Year of India-China Cultural and People to People Exchanges and agreed that the 70th anniversary of the establishment of India-China relations in 2020 will be fully utilized to deepen exchanges at all levels including between their respective legislatures, political parties, cultural and youth organizations and militaries. To celebrate the 70th anniversary of diplomatic relations the two countries will organize 70 activities including a conference on a ship voyage that will trace the historical connect between the two civilizations.”

In pursuit of their efforts to further deepen economic cooperation and to enhance their closer development partnership, the two Leaders have decided to establish a High-Level Economic and Trade Dialogue mechanism with the objective of achieving enhanced trade and commercial relations, as well as to better balance the trade between the two countries. They have also agreed to encourage mutual investments in identified sectors through the development of a Manufacturing Partnership and tasked their officials to develop this idea at the first meeting of the High-Level Economic and Trade Dialogue.

The two Leaders have exchanged views on outstanding issues, including on the boundary question. They have welcomed the work of the Special Representatives and urged them to continue their efforts to arrive at a mutually-agreed framework for a fair, reasonable and mutually acceptable settlement based on Political Parameters and Guiding Principles that were agreed by the two sides in 2005. They reiterated their understanding that efforts will continue to be made to ensure peace and tranquility in the border areas, and that both sides will continue to work on additional Confidence Building Measures in pursuit of this objective.

Modi and Xi also appraised the practice of Informal Summits in a positive light as providing an important opportunity to deepen dialogue and to promote mutual understanding at the Leaders’ level in line with the ‘Wuhan Spirit’ and the ‘Chennai Connect”. They agreed to continue this practice in the future. President Xi invited Prime Minister Modi to visit China for the 3rd Informal Summit. Prime Minister Modi has accepted the invitation.