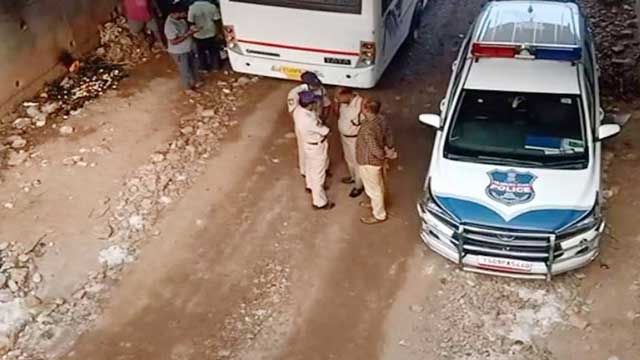 Indian police have shot dead four men suspected of raping and killing a young female vet in Hyderabad last week. The men were in police detention and were taken back to the scene of the crime in the early hours of Friday, reports BBC.

The suspects were shot when they tried to steal the officers' guns and escape, police told BBC Telugu.

The 27-year-old victim's charred remains were discovered last Thursday - and the case sparked outrage and protests over alleged police inaction.

Elsewhere in the country, there were other protests and vigils for the victim, who cannot be named under Indian law.

Why India's rape crisis shows no signs of abating

He said the men tried to escape and steal guns from the officers, so the officers opened fire. Two police officers were also injured.

Last week, three police officers were suspended after the victim's family accused them of not acting quickly enough when the woman was reported missing.

Officers had suggested she may have eloped, relatives told the National Commission for Women, a government body.

The victim left home on her motorbike at about 18:00 local time (12:30 GMT) on Wednesday to go to a doctor's appointment.

She called family later to say she had a flat tyre, and a lorry driver had offered to help. She said she was waiting near a toll plaza.

Efforts to contact her afterwards were unsuccessful, and her body was discovered under a flyover by a milkman on Thursday morning.

Rape and sexual violence against women have been in focus in India since the December 2012 gang-rape and murder of a young woman on a bus in the capital, Delhi.

But there has been no sign that crimes against women are abating.

According to government figures, police registered 33,658 cases of rape in India in 2017, an average of 92 rapes every day.