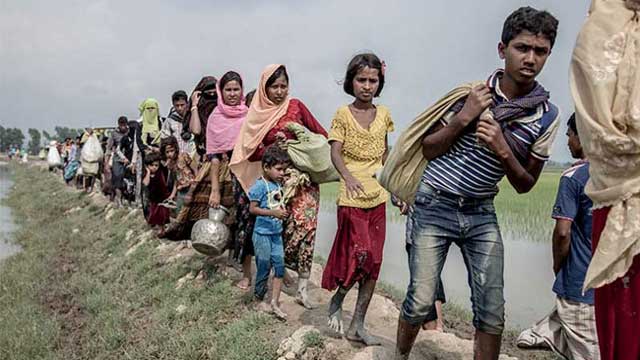 In a Facebook post on its verified page, the Chinese embassy in Dhaka yesterday said the US Deputy Secretary of State Stephen Biegun during a press briefing in Washington on October 20 commented that China "has unfortunately done very little to help resolve the Rohingya issue".

"His claim is inappropriate and not constructive at all," the Chinese embassy said.

Biegun visited Dhaka on October 14-16 after his tour to New Delhi as part of US efforts to advance its Indo-Pacific Strategy (IPS) at a time when US relations with China is at its lowest in years over trade and coronavirus pandemic.

During his visit, Dhaka expressed its deep concern over no progress on the Rohingya repatriation more than three years after some 750,000 Rohingyas fled a brutal military crackdown in Myanmar's Rakhine State in 2017.

To resolve the crisis, Dhaka also sought assistance from the international community that has so far been focused on humanitarian crisis, but not creating real pressure on Myanmar for creating conducive conditions for the Rohingyas' return.

Dhaka, however, welcomed increased trade and investments from the US.

Biegun, at a telephonic press conference on October 20 night on his visit to Dhaka and Delhi, said the US will work closely with Bangladesh and other countries in the region for lasting solution to the Rohingya crisis.

"…we hope that we see the same level of generosity and the same level of clarity in messages to the Government of Myanmar from other partners or other nations in the Indo-Pacific, particularly China," he said.

Biegun also said China unfortunately has done very little to help resolve the Rohingya issue and for whom much more should be expected, considering the proximity to China of this humanitarian catastrophe.

In response to media queries at a press conference in Dhaka on October 15, the US deputy secretary of state had said there were a number of challenges and tensions in the region that alarmed the US and other countries in the Indo-Pacific.

He mentioned the Indo-China tension over the Line of Actual Control in Galwan Valley, tension in Taiwan, repression in Hong Kong, Shenzhen, and Tibet, and increasing economic hostility towards the people of Australia.

Biegun explained that the IPS is a vision for peace and stability and not directed at any specific country.

He expressed his country's willingness to take into cognisance the South Asian countries as far as IPS is concerned, saying that for long, South Asia has been left out of most Asian strategies where the US participates.

Sharply reacting to the remarks, the Chinese embassy in Dhaka yesterday said it was everybody's expectation that Biegun's visit should focus on Bangladesh-US relationship.

"He, however, had started making groundless accusations against China on October 15 even before he left Bangladesh, with reference to China-India border conflicts, tension in the Taiwan Strait, issues in the South China Sea and the Hong Kong national security legislation, which have nothing to do with Bangladesh," the Chinese embassy said.

Such behaviour is not only a severe breach of diplomatic protocols, but also a huge disrespect for Bangladesh, the host of his visit, a peace-loving nation who believes "friendship to all and malice to none" should be the way to do diplomacy, it said.

Biegun's remarks on October 20 is simply a continuation of such behaviour, using the Rohingya issue, the gravest concern of Bangladesh, to criticise China and promulgate his own bias, the Chinese mission said.

It said since China and the US have plenty of bilateral channels to solve their problems, Biegun should not have dragged any third party in without prior consent.

On October 11, Chinese Ambassador to Bangladesh Li Jiming expressed frustration over the delay in starting the Rohingya repatriation.