Bhasan Char: 2,500 Rohingyas soon to be there 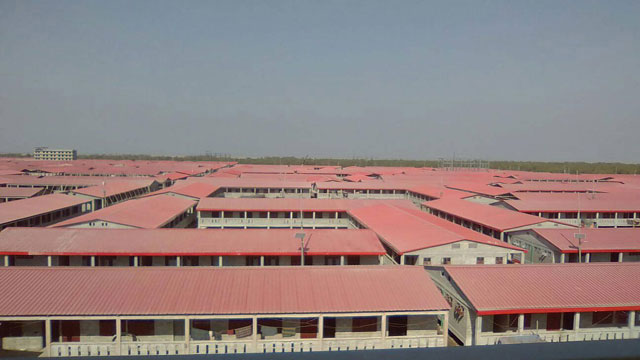 An isolated island around 52 kilometres from Chattogram city has now been transformed into a planned, modern township with rows of white, multi-storey buildings.

Even three years ago, the island, Bhasan Char, would go under water during high tide. It was home to just a few cowboys who herded buffaloes there.

The island, which used to be a hideout of robbers even five years ago, now looks ready to perform the function for which it was repurposed -- to receive Rohingya refugees who took shelter in Cox's Bazar following a brutal military crackdown in their native Myanmar in August 2017.

But the relocation process is yet to start. The UN and some aid agencies argue that the island is isolated, flood-prone and would be hazardous for Rohingyas because of cyclones and tidal surges.

A high-placed source said some 2,500 Rohingya refugees of 500 families would be shifted to the island soon as part of the relocation. Around 66 tonnes of food and other necessary household items have already been taken to the island as of November 29.

Commander Md Anowerul Kabir, deputy project director of Ashrayan-3 Project (the official title of the Bhasan Char project), however, said they do not have any update about the arrival of the Rohingyas yet.

"With 120 cluster villages capable of accommodating around one lakh people, the housing project in Bhasan Char is ready. We are waiting for the Rohingyas to come and start living here until they return to their country," he said.

Meanwhile, representatives of around 22 NGOs visited the island on Sunday and expressed their satisfaction about the overall arrangements in place.

They said the island has been totally transformed into a clean city and that it is a much better place for the Rohingya refugees compared to their current living conditions in Cox's Bazar.

This correspondent talked to some of the representatives during a recent visit to the island.

Tuhin Sen, assistant project coordinator of Pulse Bangladesh Society, said Rohingya refugees should be shifted to Bhasan Char as they will get more space for recreational activities and families will get privacy and be safer than they are in Cox's Bazar.

But in the island, all the toilets are permanent and concrete, which is hygienic, he said.

SM Imadul Islam, coordinator of SAWAB, said there is a risk of landslides in Cox's Bazar.

"So, it will be safer if the community starts living in the island," he observed.

Enam Ahmed, media assistant of RTM International, an NGO that deals with women's health issues, said the island has two hospitals and is also equipped with a sea ambulance and helicopter for emergencies, so it would be easier to get better treatment.

In the island, the authorities have also ensured security arrangements.

Last Sunday, some 213 Armed Police Battalion (APBn) members moved to the island and around 30 police members, including 10 females, have started working to maintain internal security, according to project officials.

Md Fakir, a cowboy from Noakhali district, said that he is living in the island for the last nine years.

"Earlier, we had to take shelter in a tree house during the tide as the island became submerged in waist-deep water. There were also the threat of robbers. The situation, however, has changed now," he said.

The total area of Bhasan Char is around 13,000 acres, of which around 6,427 acres are usable. The total project area is spread over 1,702 acres, but cluster villages were constructed on around 432 acres.