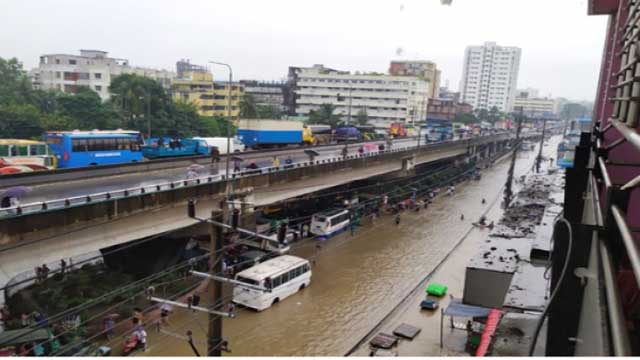 The overnight drizzle which later turned into a heavy downpour in the morning quickly inundated a number of low-lying areas in Chittagong city on Wednesday, causing immense suffering to its dwellers.

The waterlogging left commuters wading through ankle-deep to knee-deep water to reach their destinations as private vehicles and public transport became stranded on roads.

Poor drainage and waste management systems added to the sufferings of the city dwellers, with many blaming the city corporation for its failure to address waterlogging.

Abdullah Al Baki, a resident of Gate No 2 area, said: “It took me over an hour to reach the GEC Circle this morning, whereas it usually took 10 minutes. The rickshaw-pullers have also hiked the fares there are fewer buses plying on the roads due to waterlogging.”

Sheikh Farid, assistant meteorologist at the Patenga Met Office said, the presence of monsoon winds is causing the rainfall in the city, which is likely to continue in the next 24 hours.”