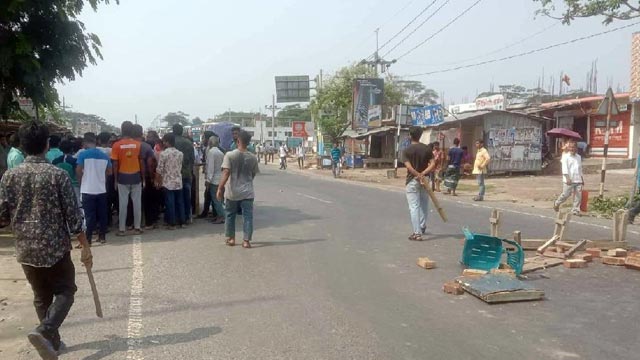 Traffic movement on the Dhaka-Kuakata highway remained suspended for an hour on Saturday as students of Barisal University staged demonstrations blocking the road protesting the assault of a fellow student by a transport worker.

Witnesses said when Foysal Shahriar, a master’s final-year student, tried to board a bus to go to Dapdapia Zero point at around 9am from in front of the university, its staffers misbehaved with him.

There was a heated argument, and the bus staff physically assaulted him at one point.

As soon as the news spread the students of the university took to Dhaka-Kuakata highway and put up a barricade on the road, halting vehicular movement for an hour.

Traffic movement became normal after an hour after the students left the highway upon assurance from law enforcement agencies that they will take steps to address the issue.

General Secretary of Barisal Rupatoli Bus and Minibus Owners Association Kawsar Hossain Shipon said those who assaulted the students are not bus staffers.

BU Proctor Dr Md Khorshed Alam said a meeting will be held between the police and the bus owners’ association on the issue.