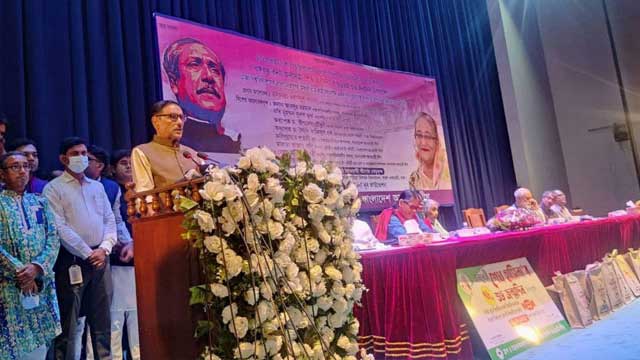 Awami League General Secretary Obaidul Quader today said the AL was born in the soil and that is why its roots have deepened into the soil.

"Our knees will not break down; our waists will not fracture. The Awami League was born in this soil.....Awami League is a party that emerged from this soil," he told a discussion at Bangla Academy auditorium.

The AL's relief and social welfare subcommittee arranged the meeting on the occasion of the birthday of AL President and Prime Minister Sheikh Hasina.

"Our roots lay deep into the soil of the country. The waist of a person who is born in this soil will not break. I did not make any mistake, but Fakhrul (BNP secretary general) did so," Quader said.

Responding to a statement of BNP secretary general Mirza Fakhrul Islam Alamgir that stated the AL's knee has broken down, the AL general secretary said: "I stated at a function at Bangabandhu International Conference Centre the day before yesterday that the waist-broken BNP is running by depending on scratch and the Fakhrul has replied to it."

"Mirza Fakhrul may forget. This was not my own statement. Think-tank Zafrullah Chowdhury repeatedly termed the BNP a knee- and waist-broken one. I just recalled him (Fakhrul)," Quader said.

Highlighting the development and achievements of Prime Minister Sheikh Hasina's government, he said: "The Bangladesh of 13 years ago and today's Bangladesh is not the same...Sheikh Hasina was born to change the fortune of
the countrymen."