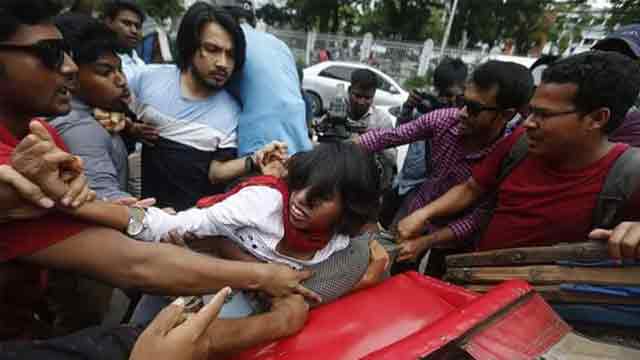 The protesters for quota reform are facing attacks since Saturday.

The protesters have been on movement since mid-February, demanding reduction of quota in public jobs from the existing 56 per cent and were scheduled to hold protests at colleges and universities carrying national flag on Monday.

As some of the protesters gathered at Central Shaheed Minar in Dhaka for bringing out procession with national flag, a group of Chhatra League leaders attacked them and picked up one of the joint convener of the platform Faruk Hossain.

The protesters said 15-20 Chhatra League men came to the Shaheed Minar riding motorbikes and beat ups the activists and picked up Faruk.

Women activists of the platform were not spared from the attack.

After dispersing the quota protesters, the Chhatra League men roamed around the campus with dozens of motorbikes.