Rohingya refugee situation is a crisis of care 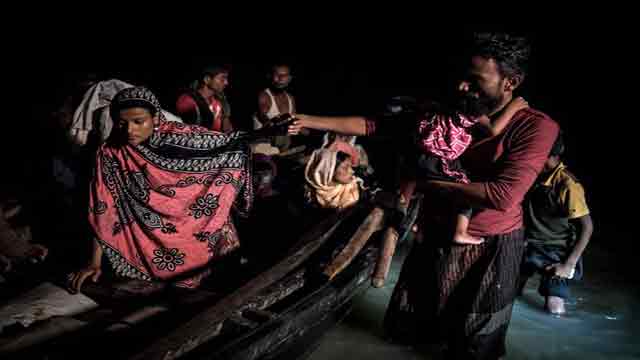 Dhaka, Dec 23 (Just News): A truck trying to overtake another car darted out from the wrong side of the road and slammed into the rickshaw. The tiny vehicle crumpled like a piece of tin foil, flipped twice and finally settled bottom upward. The truck that hit it sped away. For a moment, the six members of Nor Hossain’s family, who had been riding inside, lay upside down in silence, covered in dirt, battery fluids and blood. It was their second day in Bangladesh.

I had been in the car right behind them, and had been filming them since the moment they arrived from Myanmar for a video about the Rohingya refugee crisis. My translator and I jumped from our car and sprinted to their aid. I held a camera in one hand and pulled them out with the other. The next few days would become the worst of their lives.

The Rohingya refugee situation is a crisis of care. Nearly 650,000 refugees have crossed from Myanmar into Bangladesh seeking solace from systematic attacks. Myanmar’s government claims that the Rohingya are “terrorists” and that the attacks against them are “fake news.” But each night, under the cover of darkness, I watched thousands of them fleeing onto the shores of Bangladesh, each with stories of murder, rape and assault in what used to be their homeland.

In late September, I decided to find one family with a story that would be emblematic of these struggles.

That’s how I met Ranjuma and her husband, Nor Hossain. Ranjuma was 25 years old and nine months pregnant. She wore a makeshift maternity girdle as she climbed out of the tiny wooden boat on the Naf River. Nor Hossain helped lift her out. He was 40 years old, with a long beard. They looked ragged but ecstatic. For days before taking to the water, they had been trekking through the woods. Ranjuma’s ankles were swollen and thick. They had only two liters of water for the six of them (the couple’s two small boys, as well as Ranjuma’s brother and Nor Hossain’s mother, were with them, too). Nor Hossain held Ranjuma’s hand as they surveyed the new country.

My translator, Mohammed, explained our journalistic mission to them, and they agreed to be followed and filmed. They seemed excited to show the world their newfound hope.


The next day, the car accident happened. After pulling them out of the wreckage, we rushed with them to the closest Bangladeshi clinic. It was a basic, two-room building without power. Most of the family was shaken but only moderately injured. But for Yakub Ali, Ranjuma’s 22-year-old brother, the injuries were more severe. He held his abdomen and writhed in pain. The doctors said his injuries were internal and could not be treated there. He was carried into an ambulance and referred to the main hospital in Cox’s Bazar, nearly three hours away. He died of internal bleeding on the drive up.

What I had hoped would be a story of redemption after fleeing from Myanmar had become the opposite.

Two days later, Ranjuma felt abdominal pains as well. Her pregnancy had been a challenge. Her stomach was so large, she had been expecting twins. She rushed to another small clinic. As soon as she lay down, her water broke and she went into labor. Doctors later explained she had been so large because she had developed a large water abscess that had been pressing down on her womb.

When the baby was born, he was underweight. The water abscess had delayed his development and he was premature. After nearly 20 minutes of labored breathing, he was sent in an ambulance to the main clinic. Just like his uncle, he died on the way there.

I’ve covered wars and conflict around the world, but filming with this family was one of the hardest assignments of my career. I, like Nor Hossain and his family, had expected a story of redemption and hope in the face of oppression. Instead, it became a tale of failures. Their government back home in Myanmar had failed them, the infrastructure in Bangladesh had failed them, and the world around them, which continues to sit back, had failed them.

Nearly a month after those four painful days, I returned to the refugee camps to interview Ranjuma and Nor Hossain. They were happy to see me and glad their pain had been documented. I asked Nor Hossain if he regretted anything. Only one thing, he said.

“I wish I could have named my son,” he said. “At least then we could have given him a voice.”