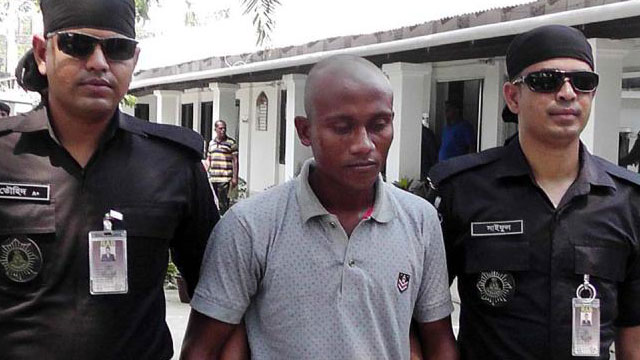 Members of Rapid Action Battalion (Rab) arrested the prime accused in a case filed in connection with the gang-rape of two girls of an ethnic minority community in Mithapukur upazila of Rangpur district, from Savar on the outskirts of the capital early Friday.

The arrestee was identified as Ratan Minji, 20, son of Badhu Minji of Pirganj upazila of Rangpur district.

Tipped off, a team of Rab-13 conducted a drive in the area and arrested him around 1 am, said Major Armin Rabbi, second in-command of Rab-13.

On April 18, Ratan made a phone call to the girl and asked her to meet him at Mahiganj in the district town.

The girl along with her cousin went to the area to meet Ratan.

Upon their arrival, Ratan along with his two associates—Hazrat and Mamun—dragged the girls to a maize filed and violated the girls in turns. They also threatened the victims not to disclose the matter to police.

On the following day, the victim who had love affair with Ratan committed suicide by hanging herself from the ceiling of her house.

Her cousin, who was also a victim, filed a case with Mithapukur Police Station on April 19.