Ershad finally laid to rest at his Rangpur Polli Nibash 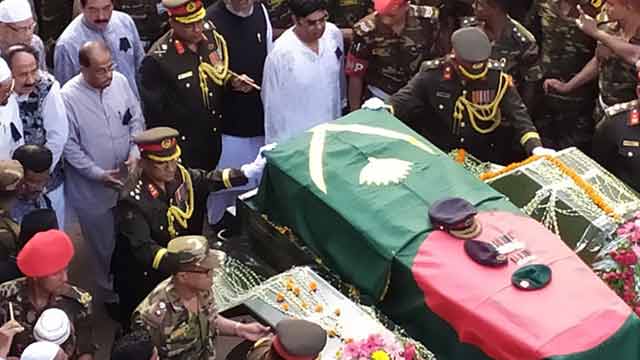 Jatiya Party Chairman and ex-president Hussain Muhammad Ershad was finally laid to eternal rest on Tuesday at Polli Nibash in his hometown Rangpur where he was the most admirable political figure for over three decades.

The former military strongman who ruled the country for nine years was buried at the grave dug by his party followers at the Litchi Orchard of his Polli Nibash around 5:53 pm as Jatiya Party was forced to revise its decision of burying him at Military Graveyard in the capital due to rigid stance of party followers in Rangpur.

Huge army personnel took position around the prepared grave before the burial to maintain discipline as thousands of people gathered there to bid farewell to their beloved leader.

Military men carried ex-army chief Ershad’s coffin, draped in an Army flag, to near the grave around 5:35pm. Later, a life sketch of the Jatiya Party Chairman was read out before observing a one-minute silence showing tributes to him.

After his fourth and final final namaz-e-janaza in Rangpur, Jatiya Party issued a statement that Ershad would be buried in Rangpur.

Showing respect for the love of people of Rangpur for her husband and Jatiya Party chairman HM Ershad, the party statement said Raushon Ershad gave permission to bury him at Polli Nibash.

She also made a request to keep aside a place beside Ershad’s grave so that she can be buried there after her demise, it said.

Earlier, the fourth and final namaz-e-janaza of Jatiya Party Chairman HM Ershad was held at Central Collectorate Eidgah here around 2:28pm with the participation of thousands of people.

Huge law enforcers were deployed in and around the Eidgah to fend off any untoward incident as local leaders announced to thwart party senior leader’s plan to bury Ershad at Military Graveyard in the capital instead of Rangpur.

On Sunday, Jatiya Party secretary general Moshiur Rahman Ranga announced that their chairperson will be buried at the military graveyard in the capital.

Protesting the decision, Jatiya party’s Rangpur and Rajshahi units held a joint meeting at the party’s Rangpur city unit office on Monday decided to bury Ershad in Rangpur at any cost. They later prepared a grave at Polli Nibash.

Earlier in the morning, the body of Ershad, who passed away in the capital on Sunday morning, was brought here for the janaza.

A helicopter of Bangladesh Air Force carrying the coffin of the Jatiya Party chief landed at Rangpur Cantonment around 11:30am.

Ershad, the leader of the opposition in parliament and five-time MP, breathed his last at 7:45am on Sunday while undergoing treatment at the Combined Military Hospital (CMH) in Dhaka.

His first janaza was held at the Army Central Mosque in Dhaka on Sunday while two other janazas were held in the capital on Monday.

Ershad’s qulkhwani will be held on Wednesday at Gulshan’s Azad mosque in Dhaka.

The deposed military dictator had been shuttling between his home and hospital for the last few months as his health condition deteriorated.

He was admitted to the CMH on June 26 as he had been suffering from various old-age complications, including low haemoglobin, kidney and liver problem, high bilirubin and serious keen pain.