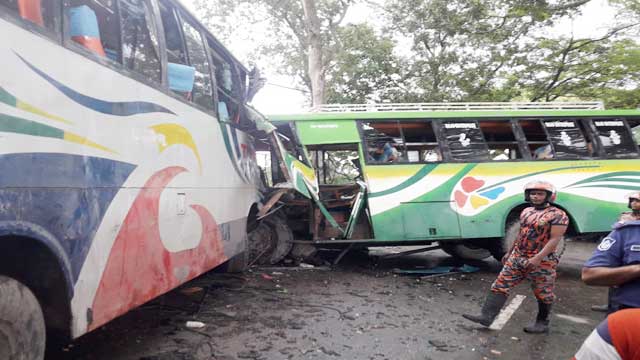 In Feni, seven people were killed and 20 others injured after a bus hit a tree near Lemua bridge on the Dhaka-Chattogram Highway.

The incident occurred around 6:00am when the Cox’s Bazar-bound bus ran into a tree on the highway, our Feni correspondent reports quoting police.

In Faridpur, three people were killed and 31 injured in a road accident on Dhaka- Barishal Highway in Nowpara area under Bhanga upazila around 8:30am.

“The accident took place when a bus of Tuhin Paribahan collided head-on with a local bus at Nowpara area around 8:30am. Fourteen of the injured were taken to Faridpur Medical College Hospital and eighteen others were taken to Bhanga Upazila Health Complex,” the police official said quoting locals.

In Kishoreganj, three people were killed after a CNG-run-autorickshaw was crushed under the wheels of a truck in Kotiadi upazila of the district.

The incident occurred around 12:00pm when a Kishoreganj bound CNG-run autorickshaw was hit by a speeding truck bound for Bhairab, the official said.