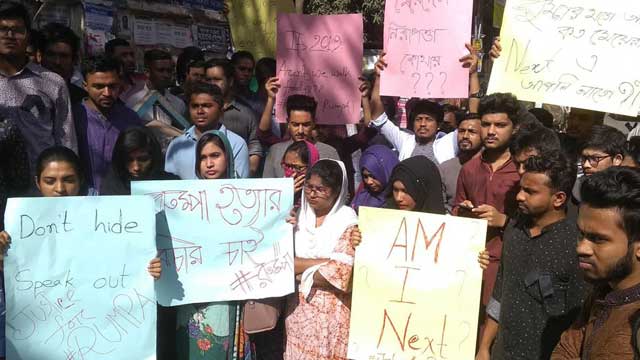 Students of Stamford University today launched a protest demanding justice for the alleged murder of their fellow Rubaiya Sharmin Rumpa in Siddheshwari area of Dhaka.

A number of students of the university first formed a human chain in front of the main entrance of their university and brought out a procession in the area around 11:30am, our correspondent reports from the spot.

Police has yet found cause of death of the girl, besides locals suspect Rumpa died after falling from a building, as they heard a sound before finding the body on the street.

Law enforcers last night identified the victim as Rubaiya Sharmin (21), a student of Stamford University. She used to live in Shantibagh with her mother and brother
Photo: Palash Khan

In the human chain, the protesters demanded exemplary punishment of the people responsible for the death.

The protesting students and teachers of the university brought out the procession equipped with various kinds of placards demanding proper investigation into the death.

The procession began from Siddheshwari area and after marching different streets, it ended in Baily Road area.

SM Shamim, assistant commissioner (Ramna Zone) of Dhaka Metropolitan Police (DMP) said they could not unveil the real cause of the death.

“We could not clear why the girl came in Malibagh area. We are yet identifying the building from where she fell off,” he said.

Police continue the investigation into the death, he said that they have already collected CCTV footage from the area and those are being scrutinised.

Rubaiya was missing since Wednesday evening. Rubaiya’s father Rokon Uddin is a police official posted in Habiganj, according to police.