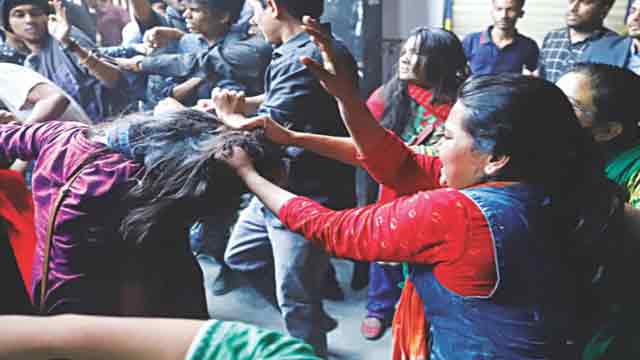 The legal aid and human rights organisation also expressed deep concern over failure of the university administration in tackling the situation, reads a press release.

Quoting media reports, ASK said BCL men attacked dozens of DU students, who were demonstrating in front of the vice-chancellor's office to press home their demands, including expulsion of some BCL leaders for “harassing” female students a few days ago.

It also urged the university authority to take action against the accused after a proper investigation.

“Ain o Salish Kendra believes the overall law and order situation of the university have deteriorated which anyway cannot be expected,” it said.

ASK also called upon the university vice chancellor and proctor to play responsible role as the guardians of students, the press release said.

On January 15, students from different departments staged demonstration on the campus demanding cancellation of DU’s affiliation with seven colleges. Later, the university unit BCL men foiled their demo and allegedly harassed some of female protesters.

On the following day, DU authorities filed case against 50-60 unnamed persons. Since then, students have been continuing their protest.

As a part of the protest programme, dozens of students staged demonstration on the campus and confined the university vice chancellor yesterday to press home their demands.

At one stage of the demonstration, BCL men attacked the agitating students, leaving at least 50 students and two campus-based journalists injured.