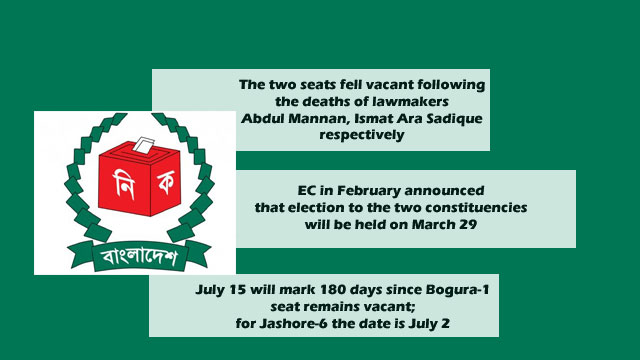 The Election Commission today took the decision of holding by-polls of Bogura-1 and Jashore-6 constituencies on July 14, amid coronavirus pandemic.

"A commission meeting has taken the decision to hold the by-election on July 14 as there is a constitutional binding to hold polls within 180 days of it [constituencies] remaining vacant," said EC Senior Secretary Md Alamgir after the meeting this afternoon.

According to constitution, an election to fill the seat of a member of parliament which falls vacant other than by reason of the dissolution of parliament shall be held within 90 days of the occurrence of the vacancy.

Provided that in a case where, in the opinion of the Chief Election Commissioner, it is not possible -- for reasons of an act of God -- to hold such election within the period specified in this clause, such election shall be held within 90 days after the last day of such period, according to the constitution.

EC in February announced that election to the two constituencies will be held on March 29. But they postponed the election on March 21, taking the coronavirus situation into consideration.