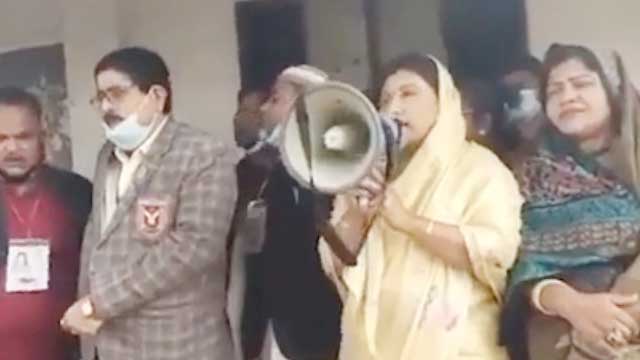 During a campaign at Ward No. 2 of the municipality on Thursday, the AL leader said, “What will the people who love the ‘sheaf of paddy’ (electoral symbol of de facto opposition BNP) do? You have to leave Thakurgaon on 13 February. I don’t want to see you after the evening of 13 February. They do not need to come to the polling centre. Who will go to the polling centre? Only (the supporters of) boat, boat and boat.”

In another way-side rally on Wednesday, Mahmuda issuing a threat to the voters, said, “I want to make it clear that if you don’t want to cast your vote for ‘boat’, we don’t want to see your faces in the area after 13 February evening. I don’t know where will you go, but you can’t stay in Thakurgaon. Those who will not vote for boat must leave Thakurgaon.”

Prothom Alo could not talk to Mahmuda Begum regarding her speeches. But AL mayoral candidate Anjuman Ara Begum said, “There’s almost no vote for ‘sheaf of paddy’ in the municipality. Sensing their sure defeat, BNP men could have circulated the speech of Mahmuda apa after rephrasing it. No AL leader and activist are saying things like that during electioneering.”

BNP mayoral candidate Sariful Islam alleged that since the threatening speech of central Mohila Awami League general secretary Mahmuda Begum and other AL leaders, the ruling party activists are threatening the BNP men. The voters are also apprehensive. We have been filing written complaints to the returning officer along with video CDs of threatening speeches of AL leaders, he said.

District returning officer Jilhaz Uddin, however, denied getting any such complaints. He told Prothom Alo on Friday that he does not know anything about threats made at rallies to the voters to leave the locality.

Threats from rallies
Earlier, on 9 January, Awami League mayoral candidate in Kushtia’s Mirpur municipality elections Enamul Haque asked people to cast vote for ‘boat’ openly though voters are supposed to cast votes behind a curtain. Video of that speech of Enamul went viral of social media.

On 4 February, Kalkini upazila unit Awami League office secretary Belal Hossain told a rally before Kalkini municipality elections in Madaripur that there is no scope of sleeping at home without casting vote for ‘boat’. That speech also went viral on social media.

In a wayside rally in Alamdanga municipality elections in Chuadanga, municipality unit Awami League president Delwar Hossain said the ‘vote’ has to be completed on the night before. There is no need to go to the polling centres for voting. on the night before the voting day, the voters have to be warned “so that no one comes out of their home otherwise they will have to face the music.”

The Awami League leader warned the voters against voting for other parties in the district’s Ramgati municipal polls.

“EVM is such a system, where we can detect who voted for symbols other than ‘boat’. Boat got 2300 votes at a centre in Chattogram while ‘sheaf of paddy’ got only one vote. The leaders of that ward detected the person who voted for BNP the following day. It can be detected,” the Awami League leader said while speaking at a rally at Char Sekandar Safi Academy on Wednesday.