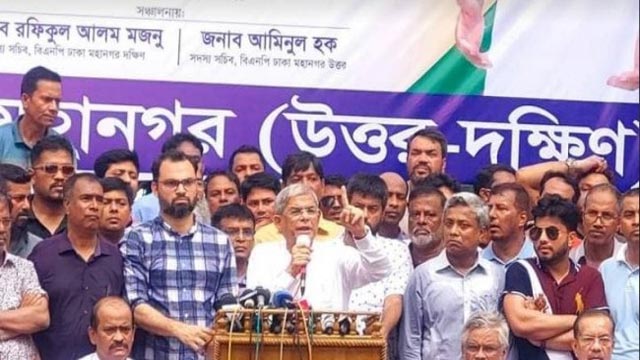 Renewing their party’s demand for allowing ailing Khaleda Zia to go abroad for advanced treatment, Bangladesh Nationalist Party on Sunday warned that people would not forgive the government if anything bad happened to her for lack of treatment.

‘We would like to make a final call for releasing Begum Khaleda Zia immediately and sending her abroad for advanced treatment. Otherwise, you must shoulder all the responsibilities,’ BNP secretary general Mirza Fakhrul Islam Alamgir said.

Speaking at a rally, the BNP leader also said the government had to take the responsibility for ensuring Khaleda’s advanced treatment abroad.

‘Or else, if anything bad happens to her, the country’s people won’t pardon you. They’ll drag you down from power,’ he warned.

Several thousand leaders and activists of BNP from different wards of the capital joined the rally with banners and festoons.

Fakhrul said that the government had long been obstructing Khaleda from going abroad for treatment though convicted ruling party leaders are availing of the same scope.

The BNP leader also said that the Awami League government was not releasing Khaleda and allowing her to go abroad as it is afraid of her popularity.

Fakhrul alleged that the government has kept Khaleda confined by convicting her in ‘false’ cases through ‘controlling’ the judiciary and the Anti-Corruption Commission in a planned way only to remove her from politics.

Khaleda Zia was admitted to Evercare Hospital in the capital in the early hours of Saturday as she suddenly fell ill.

A stent was placed in the heart of the BNP chairperson Khaleda Zia on Saturday afternoon.

She has been kept under close observation for 72 hours due to two more blockages and some other complications in her heart, said her physician Dr AZM Zahid Hossain.

Fakhrul said that three blockages were found inside the BNP chairperson’s heart through a coronary angiogram test on Saturday as per the advice of the medical board formed at Evercare Hospital for her treatment.

Later, she was found guilty in another corruption case the same year.

Amid the Covid pandemic, the government temporarily freed Khaleda from jail through an executive order suspending her sentence on March 25, 2020, with conditions that she will stay at her Gulshan home and not leave the country.