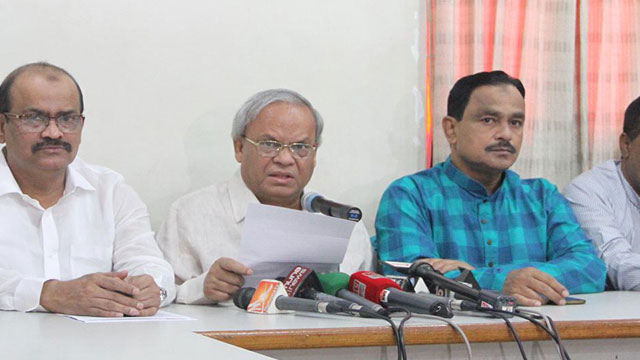 BNP today came down heavily on the government for its move to shift Begum Khaleda Zia at Keraniganj Central Jail in Dhaka and said the ruling quarter is playing a dirty game over life of the party’s chairperson.

“Soon after the arrival of the prime minister from London, a concern ministry of the government has ordered to set up a special court in the Keraniganj Central Jail to try Khaleda Zia,” BNP Senior Joint Secretary General Ruhil Kabir Rizvi said.

While addressing a press conference at the party’s Nayapaltan central office in Dhaka, the BNP spokesperson said, “It is clear like daylight that the government wants to meet its politics of vengeance throwing Khaleda Zia in the risk of her life.”

The law ministry on Sunday issued a gazette notification stating that the trials of 17 cases lodged against Khaleda Zia will be held at a special court inside Keraniganj Central Jail in Dhaka on security ground.

Besides, Home Minister Asaduzzaman Khan said Khaleda Zia will be taken to Keraniganj Jail on completion of her treatment at Bangabandhu Sheikh Mujib Medical University (BSMMU).

Protesting the move, Rizvi urged the government not to incarcerate the freedom of court for eliminating its political opponent and demanded the immediate release of Khaled Zia.

“Otherwise, people won’t spare you (govt),” Rizvi said threatening that BNP along with the countrymen will take to the street to realise their demands.