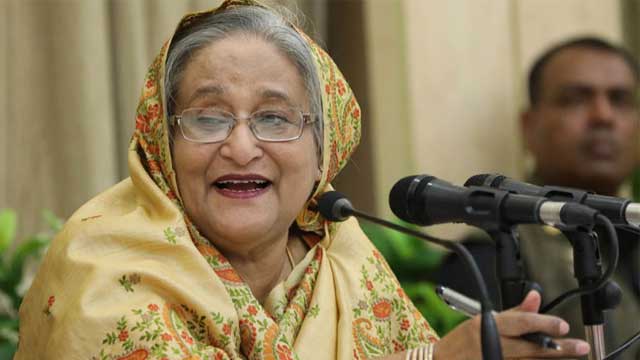 Prime minister Sheikh Hasina on Sunday said that unwillingness of Myanmar and opposition by international aid organisations working to support Rohingyas were the major challenges of starting Rohingya repatriation.

At a press conference at her official residence Ganabhaban, she said that she would visit China in July to join World Economic Summit and she would talk to China about repatriation of Rohingyas who fled to Bangladesh from Myanmar’s Rakhine state in the face of ethnic cleansing.

She called the press conference to brief media about the outcome of her 11-day visit to Japan, Saudi Arabia and Finland.

The prime minister expressed hope that she would be successful in dealing with the Rohingya issue with China as the Chinese president invited her to visit the country in July and she would talk to president Xi Jinping about the issue.

‘Myanmar is the main obstacle as they don’t want to take back the Rohingyas and the international organisations are also against the repatriation,’ she said.

Hasina said that the international aid organisations working to help the Rohingyas were not interested in Rohingya repatriation as they would lose fund and their jobs would be at risk if the ‘refugees’ were repatriated.

She said that her government signed a repatriation agreement with Myanmar and prepared lists of Rohingyas willing to return. It should be investigated why the Rohingyas went for sudden protests against the repatriation and who instigated the protests.She said that newly re-elected Indian prime minister Narendra Modi also invited her and she would visit India anytime to discuss different issues, including Rohingya repatriation.

Replying to a query, she said that the issues of terrorism and Rohingya crisis were discussed during the 14th Organisation of Islamic Cooperation summit and all agreed to reach an immediate solution to the crises.She said that she has talked to India, China and Japan on the Rohingya issue and they equivocally said that Myanmar should take back the Rohingyas.Asked about different crises in Rohingya camps at Teknaf in Cox’s Bazar, Hasina said that all the problems would be resolved one after another and she was very concerned over the issue.

‘Army, Border Guard Bangladesh and the police were instructed to cordon the area for ensuring security for all,’ she said.

About 740,000 Rohingyas entered Bangladesh fleeing military crackdown in northern Rakhine State of Myanmar beginning from August 2017, taking to about 1.14 million the population of the Myanmar’s ethnic minority group in Cox’z Bazar.

Responding a query on Teesta water sharing with India, the prime minister said that Bangladesh would not have to seek water from others if water could be reserved properly.

‘Bangladesh is delta. All rivers originated from the Himalayas flow through Bangladesh,’ she said, adding that had Bangladesh taken steps to preserve water, it would not have to seek water from others.

She said that the government had taken the Delta Plan and started dredging rivers to meet the water crisis.

‘What will they [India] do with extra water? So, don’t worry. They have not given water but they are giving us electricity,’ she added.‘Bangladesh resolved difficult problems like the maritime boundary.

It also resolved the enclave problem in a friendly approach,’ she said.Responding a question about the previous technical glitch of her special flight and travel of a pilot of her special flight without passport, the prime minister said that the people responsible should be careful in these regards.

‘Why such issues appear frequently? People who are facing losses for ensuring discipline in Biman Bangladesh Airlines are trying to destroy Biman in different ways,’ she said.

Hasina said that the government tightened security at the immigrations at the airports for all passengers including VIPs and VVIPs.

There will be a refuelling station for aircrafts in Cox’s Bazar and the flights of international routes will not only refuel here but also see the beauty of the sea beach if it can be developed properly, Hasina said.

She said that the 127km sandy beach with special significance to tourists would be developed.Replying to another query, Hasina, also the Awami League president, said that the sentences of Bangladesh Nationalist Party acting chairman Tarique Rahman handed by courts must be executed.

Bangladesh has been in talks with the British government to bring him back, she said.‘I hate to name him,’ she said.

Criticising the statement of a daily’s editor in a foreign media, Hasina said that the editor was not happy to see democratic government in power as the editor was used to write as prescribed by the Directorate General of Forces Intelligence during an emergency regime.She said that her government never created any obstacle to the freedom of press.The editor could make such statements against the government as the freedom of press was ensured in the country, said the prime minister.

She advised the editor, without naming him, to communicate with DGFI if he was interested in writing more prescribed articles.

In a recent interview with Germany’s public international broadcaster Deutsche Welle daily Start editor Mahfuz Anam said that media in Bangladesh was facing a time of self-censorship and he failed to write articles freely about the December 30 general election.

Criticising extremism, the prime minister said that almighty Allah was the ultimate judge to decide the future and the Quran allowed nobody to kill innocent people in name of Islam.

She also criticised Islamic preachers who were against the empowerment of women.She finds it meaningless to wear burka like a live tent and full sleeve gloves.

The prime minister returned home Saturday morning winding up her visits to the three countries from May 28 to June 7.