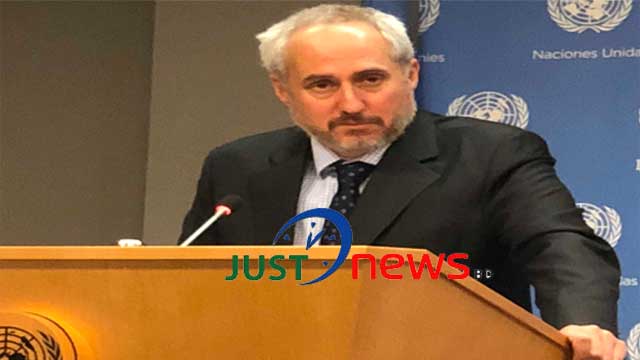 The Secretary‑General focused on Rohingyas during his phone call to the ruling Prime Minister of Bangladesh, he added.

Stéphane Dujarric made this comment in reply to a question at noon briefing held at UN headquarter on Wednesday.

In reply Stéphane Dujarric said “I think we've expressed our concern about the current political situation, the political space in Bangladesh. The Secretary‑General did speak… did have that phone call. It did focus on the Rohingyas. And again, I think the Secretary‑General thanked the people of Bangladesh and its Government for hosting hundreds of thousands of people. There is a concern, as the monsoon season approaches, that the shelter in the camps that they may have… that they have may not be adequate, and there's an effort by the international community with the support of Bangladesh to ensure that safer shelter is found.”

In reply to another question on repatriation of Rohingya Muslims, Spokesman for the UN Secretary-General said “Our position is unchanged, that any return of refugees needs to be voluntary. It needs to be dignified. They need to be able to choose to go home to where they came from, not into any other place that they're forced to go into. That's a position of principle that is unchanged.”